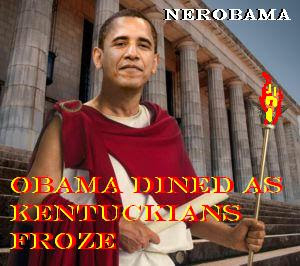 Is Barack Obama an insensitive lout who serves $100 per pound steaks to his elite guests and turns up the heat in the White House high enough to grow orchids while a million of his countrymen are without power and dozens are freezing to death? If not, why not?

Solely because that is not the story the media want to tell.

The Anchoress has an excellent roundup. Glenn Reynolds has been on the story too. One of Glenn's readers writes:

OBAMA SUCKS. THE MSM SUCKS, TOO

IT'S BEEN 5 COUNT'EM FIVE DAYS SINCE THE LIGHTS WENT OUT IN KENTUCKY AND FEMA IS NOWHERE IN SIGHT.

I BLAME OBAMA.
Posted by Reliapundit at 12:05 AM

Damned leftists! They're the most cold-hearted of politicians.

I just linked to this gem of a post.

Funny yesterday I was seeing a History Channel special about Roman engineering before the Super Bowl and it dealt with Nero, as well as other later Emperors/Ceasars.

But Kentucky is a hick Red State with not enough electoral votes that would matter to HUSSEIN.