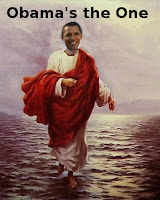 Having lived here in the greater D.C. area all my life, I’ve seen twelve inaugurations come and go (1960 – 2004). Some local disruption is, of course, unavoidable for those of us living so close to the seat of federal power. But the upcoming inauguration of Barack Husssein Obama, “The One,” takes the prize for madness morphing into worship. Even the Big East basketball coaches are considering how much to accommodate Inauguration 2009:

..."Whenever you have a change of presidents, it's a special time," [Gerogetown Coach] Thompson said during a conference call with Big East coaches yesterday. "But this, as we start to welcome our 44th president, is a very special time here -- for me personally and for a lot of people."

And while Georgetown is the sole Big East school in the nation's capital, Thompson isn't the only coach who's weighing how to incorporate Tuesday's inauguration into the highly structured lives of his student-athletes....

Did Coach Thompson and his cohorts hold previous inaugurations in such high esteem? If so, I don't recall hearing so....