WHERE IS STEIN BAGGER? 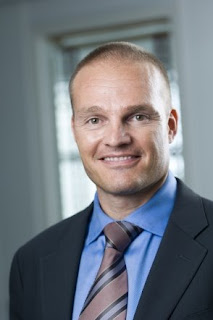 UPDATE: STEIN BAGGER WANTED BY INTERPOL
Most readers of this blog must now be thinking "Wait...who is Stein Bagger?" He is the lead character in a truly amazing story for our time...but first let me posit that the current financial crisis is the "watergate" of the modern financial system. Just as it took Ronald Reagan to restore faith in the political system (for rightwingers that is)...and one could argue that Obama's election is the culmination of that process (i.e. young and disaffected voters actually participated in the election...and are soon to enjoy their own rude awakening...) it may take many years to restore faith in the financial system - and it's actors - after an eventual economic recovery.

Stein Bagger was until recently the President and C.E.O. of a company called I.T. Factory. This company was a little software development company that enjoyed explosive sales growth over the past few years. At its' peak, ITF was selling about $2 million dollars per employee! And most of the 139 employees were software developers or office personnel!!! Stein Bagger was responsible for 90% of the company's turnover!

Just two weeks ago Ernst & Young awarded ITF and Stein Bagger the Entrepreneur Of The Year 2008 award - which has since been rescinded. And fyi KPMG was the Company's accountants...

Now the proverbial sh*t has hit the fan...the house of cards has crumbled and the truth is beginning to emerge: Stein Bagger created a SCAM based on fictitious invoices for fictitious leasing contracts with fictitious companies. He then secured real financing for these fictitious transactions from an array of the leading banks and companies...Danske Bank, IBM, HP etc. I would guess these were short term agreements, that required an expanding supply of new contracts to finance. Stein Bagger must have realized that his leasing carousel was getting too big...and buyers interested in the company were getting too close to the truth. Now Stein Bagger has disappeared - and reliable sources estimate he has absconded with 200 MILLION DOLLARS!

You can find the following PR crap on line about this crook:

For an event IT Factory sponsored in California:

Stein Bagger joined IT FACTORY in December 2001. His main purpose was to devise and implement new strategies to cope with changes in global IT market after the .com burst. Another asset for IT FACTORY is benefiting from Stein's in long time experience in a firm and focused execution and how to grow profitable businesses. Prior to Stein's engagement with IT FACTORY, Stein has been President and CEO in other international software companies with a primary focus on business development, strategic alliances and financing. Stein Bagger holds two bachelor degrees; one in accounting and one in economics. Stein also holds an MBA and a PhD in International Business.

Well - actually Stein Bagger's CV was also a "tissue of lies" - no MBA or PhD. In fact he was a miniput steroid ingesting body builder with strong connections to the Hell's Angels. A look at his work experience reveals involvement with about 16 companies - one third of which went bankrupt and the rest were closed by the Government! His real CV would show that Stein Bagger was eminently qualified to pull off this "heist".

Hopefully an English language journalist will bring the complete story to a wider public - or you can wait about 18 months and see the film Zentropa (as in Lars von Trier) plans to make about this saga. It's got all the elements - money, betrayal, and sex! Maybe they will cast Demi Moore as the wife, and Cherize Theron as the Swedish-fitness-instructor-mistress kept in a company apartment in Stockholm!!!

What pisses me off most is the long list of idiots, working at these banks, who were tripping over each other to lend money to this crook!!!!

Posted by northern seer at 4:00 AM

"fictitious" is how you spell it!

And as a matter of fact, he was arrested in LA today. Sat, Dec 6, 2008, by Officers from Central Division. He has been turned over to US Marshals.

Arbiter said...
This comment has been removed by the author.
1:52 PM

The only objection that i have to this post is the characterization of stein as a "steroid injecting bodybuilder." As a bodybuilder myself, I can tell you that Bodybuilders are about 90% conservatives. Something to do with the discipline required to get your body into extreme shape. There are no excuses for failure when it is all about YOU. Also, bodybuilders are very intelligent as we spend a TON of time pouring over scientific studies and journals. So just know this the next time you want to slag a bodybuilder.