FOR THE FIRST TIME, MUSHARRAF PUBLICLY SPECIFIES WHERE OSAMA IS HIDING 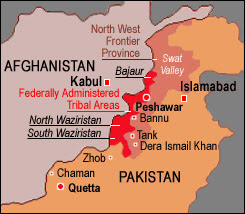 President Pervez Musharraf has for the first time identified an area where he thinks al Qaeda leader Osama bin Laden may be hiding, according to Dawn.

When asked where he thinks the Osama could be, Musharraf said in an interview to The Washington Post that he could be in the area that borders Pakistan’s Bajaur tribal agency and Afghanistan’s Kunar province.

WHY TAKE CHANCES: LET'S JUST NUKE THIS AREA IN BAJAUR-KUNAR.

UPDATE: THIS IS AN AREA WE'VE LONG AND RECENTLY ATTACKED FOR THIS VERY REASON; FROM ASIA TIMES (VIA VWT JULY 17, 2007):

The Bajaur area has been hit twice by Central Intelligence Agency predator drones, one specifically after Zawahiri. However, at a time when al-Qaeda is reactivated and the Taliban's main focus is to lay siege of Kabul, via adjacent Nooristan province in Afghanistan, aerial surveillance is considered insufficient.

... As a result, a large US base is under construction on a mountaintop at Ghakhi Pass on the Pakistan-Afghanistan (Bajaur) border.

Militants believe this is in preparation for an operation inside Pakistan to clamp down on them as well as to renew the hunt for bin Laden and his associates. As a result, the militants have attacked the new base in an attempt to delay its construction.

MY GUESS: MUSHARRAF WOULD ONLY SAY THIS IF:
Posted by Reliapundit at 7:18 PM