HILLARY CLINTON IS A PIG 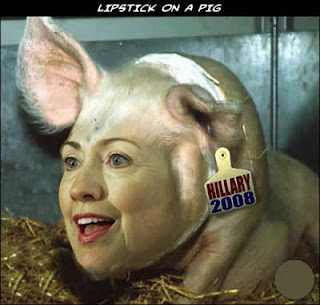 Sen. Hillary Rodham Clinton (N.Y.) has won tens of millions of dollars more in federal earmarks this year than her rivals for the Democratic presidential nomination, even though two of them have significantly more Senate seniority.

A review of the first three appropriations conference reports finished by Senate and House negotiators shows that Clinton has successfully requested at least $530 million worth of projects.

... Put together, the rest of the Senators have around $210 million in pork aggregate, or less than half of that garnered by Hillary.

THESE LEFTIES ARE TOTALLY FULL OF IT.
Posted by Reliapundit at 12:32 AM

This is absolutely disgusting. Making Hillary look like a pig? Yeah that's real mature of you. Listen, Hillary is our only hope to take back America and get it under control, and we don't need losers like you turning it into a laughing stock.

take back America and get it under control

this sounds fascist to me.

hillary wants the state to raise our kids and not the kid's parents.

hillary is tanking in the polls.

i think the dems will nominate obama or gore.