PROOF FROM THE UK THAT TAXPAYER-FINANCED UNIVERSAL HEALTHCARE SUCKS: WHEELCHAIRS 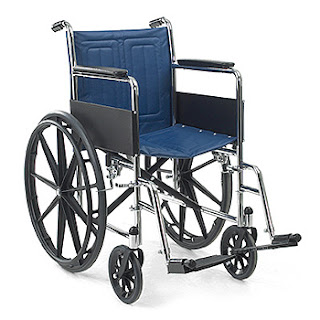 Disabled people in the county are being forced to wait months and even years for wheelchairs from the NHS.

Norfolk PCT admitted that in February this year there were 647 people across the county on the waiting list for wheelchairs, but says in recent months it has reduced that to just 240.

One is Marina McKay's husband Fraser, who has been waiting for a year for a wheelchair to replace the one he left behind after moving from a private care home in Northampton.

He was left brain-damaged after an accident in 1994 and because there was little provision to deal with such a severe brain injury in East Anglia, his family sent him to a clinic in Northampton.

But a year ago Mrs McKay, 58, who lives in Wymondham, decided her husband was better off nearer home at NHS-run Oak Farm, in Taverham, and moved him back, only to be told that he could not take his wheelchair with him when he left the clinic.

IF TAXPAYER-FINANCED/UNIVERSAL HEALTHCARE DOESN'T WORK THERE, THEN WHY SHOULD WE DO IT HERE!? IT MAKES NO SENSE. YET THAT'S EXACTLY WHAT EVERY SINGLE DEMOCRAT CANDIDATE FOR THE PRESIDENCY WANTS TO DO HERE.
DON'T FALL FOR IT.
Posted by Reliapundit at 8:25 AM