Sharia Law in Deutschland? Not yet . . . 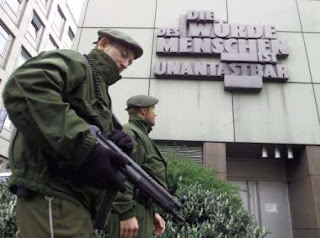 The press, the Secretary General of the CDU, a spokesman for the opposition Greens, and even the Central Council of Muslims in Germany have condemned a local German judge who threw out a Moroccan immigrant woman's suit for divorce from her abusive husband because the judge decided that "Islamic law allowed a man to strike his wife."

The woman had filed for immediate divorce on the grounds that the husband, also of Moroccan origin, regularly beat her and threatened to kill her. The claims were backed up by a police report.

But the female judge, who has not been named, made clear in a letter that the wife's bid had little chance of approval because, according to her, Islamic law allowed a man to strike his wife.

Despite the chorus of disapproval, and a Frankfurt court's decision to accept a claim of bias against the judge, her injudicious opinion shows that there are in fact German officials who are willing to acknowledge that Sharia Law, rather than German Law, should govern the lives of Muslims living in Germany.

and if that contract allows one to beat the other

but marriage is not merely a private contract; it is the foundation of human culture.
in the west, this is why the state vests the power to grant marriage contracts - because marriage is and has long been recognized as being of central importance.

and when one culture - Muslim - defines marriage as an institution predicated on physical intimidation - OM MISOGYNY - then that says a lot about islam.

islamo-misogyny must be attacked everywhere. including germany.

homes in which islamo-misogyny is practiced with violence are homes which raise jihadoterrorists.

so, we must put an end to islamo-misogyny not only to save muslim women, but to protect ourselves.

i just added the pic.

it's a pic of the courthouse in frankfurt.
taken a few years ago.

i thought the words on the courthouse were particularly ironic.

unless of course the judge meant by her decision that these words only apply the men, and do not apply to women, who - the judge seems to be saying - can be touched and touched violently.

This is from article one of the basic law of the Federal Republic of Germany.

I translate: "The Dignity of Human Beings is inviolable."

I don't think the judge meant to exclude women, so much as Muslims. I think she meant to say: "The Dignity of Human Beings is inviolable, except where prohibited by Sharia Law. Your mileage may vary."