AUTONOME ANARCHIST ACTIVISTS ARE AS VIOLENT AS NAZI'S! 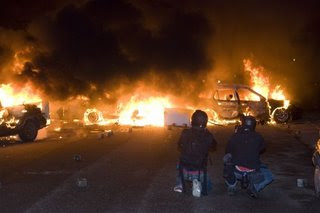 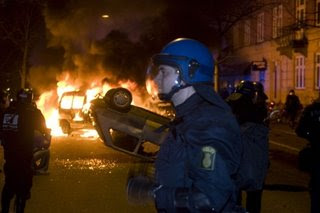 Day 2 of the street battles (link to BBC) in Copenhagen has passed with another 200 arrested.
Many of the activists in the streets have come from other countries to support their anarchist brothers.
What do these seasoned streetfighters from previous anti-globalisation riots do to express themselves? Start bonfires (what about global warming?), destroy the property of innocent 3rd parties - and they invade a High School to destroy computers, multimedia equipment and BURN BOOKS! Yeah they burn books - like Nazi's!
They also set fire to a nursery school in Norrebro. And attacked another in Christianshavn. (Why target these institutions? It's City Property!)
Many of these foreign activists are being housed in the alternative collectives throughout the city, for example the community of Christiania - on the other side of the City about 6 kilometers from Ungdomshuset - the focus of the Riots. Christiania - a former military area squatted upon by activists some 30 years ago - was Copenhagen's second biggest tourist attraction and until last year also home to an open hash market. It still is home to hippie holdovers from the 70's and other people who are unable or unwilling to fit in to "society-at-large". The Government has been making moves to normalize the situation in Christiania, and is salivating over the prospect of developing the prime real estate there. If the situation does not calm down do not be surprised if the Government makes use of the present situation to 'clean up' Christiania.
UPDATE: The police have preemptively raided some of the houses that have been harboring the imported thugs. BRAVO!

PS: Listen to the arguments laid forth by the defenders of these vandals:

1. the government gave them no choice but to resort to violence
2. society must have room for people who want to live according to alternative lifestyles

If you accept that BS you might as well step forward and start defending the rights of pedophiles to be free to live according to their 'special lifestyle', even if it is "against the law".

After 2 days of this anti-social behavior I do conclude that these activists are no better than Nazi's or Pedophiles!
Posted by northern seer at 4:03 AM

We are the best of the best in Bongs with a beautiful accessories and we have the best service.
Be one of the ones that have the privilege to enjoy our Bongs.
we have all the ones that need to obtain not late more and contact us now.
Head Shop and Bong Amazing Legal Herbal Highs, featuring Herbal Smoke, Bongs,