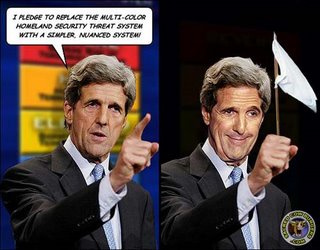 Surrender as 'Realism' -- Retreat would win us no friends and lose us no adversaries.

[EXCERPT]: So let's add up the "realist" proposals: We must retreat from Iraq, and thus abandon all those Iraqis--Shiite, Sunni, Kurd, and others--who have depended on the United States for safety and the promise of a better future. We must abandon our allies in Lebanon and the very idea of an independent Lebanon in order to win Syria's support for our retreat from Iraq. We must abandon our opposition to Iran's nuclear program in order to convince Iran to help us abandon Iraq. And we must pressure our ally, Israel, to accommodate a violent Hamas in order to gain radical Arab support for our retreat from Iraq.

This is what passes for realism these days. But of course this is not realism. It is capitulation.

What defeated the USSR was not detente, and not containment; it was Reagan's huge defense build up, SDI and straight-forward/"in your face" no-holds barred "TEAR DOWN THIS WALL!" rhetoric. IOW: confrontation.

So called realists would like you to believe that they are in a noble line of "Cold Warriors," and they'd like you to believe that containment won the Cold War, (and that Vietnam was a waste). They'd like you to believe that global jihad can be likewise contained - by engaging in detente with Iran and Syria, but they are just as wrong. FACT: From 1945 to 1980 -- the era of so-called containment, appeasement and detente -- the USSR grew and grew and grew. They did not stop growing and start collapsing until Reagan.
Actually, adopting the policies of containment and appeasement now would be WORSE than they were during the Cold War; it would be like appeasing Hitler in 1942!
UPDATE: It's NOT off-topic to include a photo-shopped pic' of John Forbes Kerry in a post about so-called realism. Kerry would like you to believe he is a "realist" just like Baker and just like his own father - Richard - a life-time bureaucrat in the State Department, and a lifelong member of the "realist school", (who opposed Reagan and attacked Wilsonian foreign policy). Here's a quote:

"Americans," he writes, "are inclined to see the world and foreign affairs in black and white." They celebrate their own form of government and denigrate all others, making them guilty of what he calls "ethnocentric accommodation -- everyone ought to be like us."

As a result, America has committed the "fatal error" of "propagating democracy" and fallen prey to "the siren's song of promoting human rights," falsely assuming that our values and institutions are a good fit in the Third World.

And, just as Americans exaggerate their own goodness, they exaggerate their enemies' badness. The Soviet Union wasn't nearly as imperialistic as American politicians warned, Kerry argues. "Seeing the Soviet Union as the aggressor in every instance, and the U.S. as only reacting defensively, relieves an American observer from the need to see any parallel between our use of military power in distant parts of the world, and the Soviet use of military power outside the Soviet Union," he writes. He further claims that "Third world Marxist movements were autonomous national movements" -- outside Moscow's orbit. The book culminates in a plea for a hardheaded, realist foreign policy that removes any pretense of U.S. moral superiority.

It matters not who promulgates so-called "realism" in foreign policy and national security - whether is Kerry or Hagel or Baker or Hamilton or Scowcroft or Brzezinski. "Realism" is an amoral policy which has never defeated an enemy, never liberated a people, and never brought lasting peace, either. In fact, it brought us 9/11.
Posted by Reliapundit at 12:45 AM

Reliapundit: i was googling for more links on this post aand found this great comment at cq:

Gates, Scowcroft, Baker and co. are not so much realists as being wed to the status quo. These architects of Bush 41’s immediate post Cold War foreign policy could not see a world where the Soviet Union or Yugoslavia didn’t exist and worked mightily to lobby against the dissolution of both countries. Scowcroft got Bush to give his embarrassing and infamous “Chicken Kiev” speech where he urged the Ukraine to stay within the Soviet Union. During the same trip Bush went to Belgrade to urge the rival nationalities to maintain Tito’s nation. However the political dynamics of each situation made the status quo, as desirable as it may have been a non starter. As a result the US had no policy to manage the break up of Yugoslavia and bequeathed a policy vacuum to Clinton’s inept foreign policy team. Scowcroft’s failed policy directed at maintaining a Soviet state, something he felt comfortable with, had no adverse results mainly because we had no influence over the situation. However, in the case of Yugoslavia where the status quo was failing Bush missed an opportunity to at least limit the damage of the coming national breakup.

The decision to leave Saddam power was motivated by the same desire to avoid a dynamic situation that his ouster would have caused. As a result Saddam was left as a problem to fester and suck up resources and foreign policy energy for the next decade. Ironically, had we aided the Kurds and the Shia in 1991, something that could have been done without the direct involvement of US forces beyond air strikes against Saddam’s loyalists, this three way struggle between the Kurds, Sunni and Shia would have been worked out by now and neither the Clinton or Bush 43 administrations’ Middle East policy would have been consumed by the Iraq problem.

The so-called realists are not so much realistic as they are unimaginative and uncomfortable with a world different from its current state whatever that state may be. The realists were not being realistic at all at the end of the Cold War and that lack of realism led to foreign policy disasters in the Balkans and Southwest Asia. It was only their inability to influence events in the disintegrating Soviet Empire that prevented them from creating a much more serious foreign policy disaster.

We can thank Pat Buchanan for the false dichotomy between the so-called realists and the “neo-cons.” The so-called realists are people who lack imagination and cannot deal with the dynamics of a rapidly changing world. When that change is inevitable there efforts are destined to make the world a more dangerous place because they create a policy vacuum that will be filled by something else. What Buchanan mislabeled as neo- conservativism is nothing more then policy attempts to work within and give some favorable direction to an uncontrollable international dynamic. In this context neo-consertivism is neither new nor necessarily politically conservative. But again Buchanan and his acolytes use the term to mean Jew and nothing more.

After the disaster that was Operation Market Garden Montgomery said that the operation was 90% successful.

Bernard, Prince of the Netherlands said in retort “My country cannot survive another Montgomery success.”

The US might not survive another realist’s success.
Posted by: jerry [TypeKey Profile Page] at November 10, 2006 07:20 AM

Let us face facts, a mere defense buildup is going to do no good against our Muslim enemies. So, what we are advocating is total war.

There is no other choice. We have to beat them into submission.

yes: direct confrontation. asap - while we still have superior weapons.