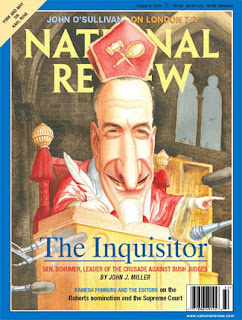 New York Senator Chuck Schumer is one of the MOST repugnant members of the United States Senate. He is, in fact, an Authoritarian, if not a Stalinist. He would be very happy if we had a form of government where we could get rid of elections and the people are governed by a ruling elite...the kind of government Plato and Marx wrote about.
Schumer is angry that the new conservative members of the Supreme Court have made some decisions that have gone against precedent. In fact, one of the court's liberal members, Stephen Breyer, is actually lobbying members of Congress to look at the recent decisions. Naturally, he was able to persuade the Senate's biggest eunuch, Arlen Specter; [see LMC's post.]

Breyer has publicly raised concerns that conservative justices were violating stare decisis, the legal doctrine that, for the sake of stability, courts should generally leave precedents undisturbed.

"It is not often in the law that so few have so quickly changed so much," Breyer said, reading his dissent from the bench in June to a 5-4 ruling that overturned school desegregation policies in two cities.

Okay, so the court shouldn't ever go against precedent. What is established now is absolutely, Constitutionally correct and not even debatable. What is this, Global Warming?

I'd like to ask Justice Breyer if how he feels about the precedent of the Dred Scott decision. "Oh well, that's was an obvious mistake," he'll say. So what? It's precedent, isn't it?

Anyway, back to the point at hand. Chuck Schumer has declared that Bush will not be allowed to put another conservative on the Supreme Court. Well, democracy was fun while it lasted, wasn't it?
There's another story out today about how Daily Kos and Moveon.org are going to start targeting advertisers on Fox News. Their argument:

"We're not trying to silence anybody," Green said. "Rush Limbaugh has a right to be on the air—he admits his point of view. Fox doesn't."

I'm making a similar call to the Democrat Party. Admit who you really are.

Relipaundit adds: Great post! I just love how the Lefties say the Constitution is written in stone when it comes to decisions it LIKES (like Roe v Wade - which BTW is based on entirely vestigial science!), but when it comes to things they don't like, then their favorite refrain is, "IT'S A LIVING CONSTITUTION!"

The Democrats have become complete freakin' hypocrites. They have NO PRINCIPLES, only demagoguery and fear-mongering and class-warfare.

That's who I think they are at least - and was raised by Democrats, and first registered as a Dem in 1974 - AND I LIVE AMONG THEM IN NYC! So I know of what and whom I speak!

I voted Bush in 2004, and will probably never ever vote Dem again. This post explains another reason why.
Posted by Jim Rose at 8:36 PM

Lawrence went against precedent, too.

Roe may be bad science, however as policy it conforms to reality.

If laws are powerful enough to change reality I'd like to see the law of gravity repealed.

My ambitions are more modest. I'd actually like to prohibit the consumption of alcohol for intoxication or pleasure. Fortunately I don't drink much and wouldn't miss it.

The Democrats being in control of Congress right now is like a bad nightmare, and I just keep wishing I could wake up!!

i just re-read b woodruff tome on the scotus - brethren...

he deals with blackmun and roe in detail.

blackmun did not decide the case based on the constitution; he did medical research and made the law/drew the line based on where he felt the science was/where "viability" was at the time.

that has changed.
that is a FACT.
a scientific MEDICAL FACT.

when law is based on science, then when the science changes the lkaw should change.

THEREFORE, at the very VERY least, we should alter Roe to make easier for states to limit abortions BEFORE the first trimester is over.

that is: IF YOU WANT CONSTITUTIONAL LAW TO BE BASED ON SCIENCE.

as for where REALITY is it is even simpler:

the REALITY is that from the MOMENT of conception a distinct and unique person has been formed.

it has different and unique DNA - IT IS NOT PART OF THE MOTHER. It is not part of HER body. It is inside her body.

IN HER WOMB - what should be the most CARING place in this world.

think about it: why do you think we use the word CONCEPTION for that unique moment!?

because A LIFE IS CONCEIVED.

and then there's this angle: repealing Roe would only revert the issue/controversy to the states, which could each have their own laws. some might make it COMPLETELY legal. others COMPLETELY ILLEGAL, and others might leave it pretty much where it is.

and the side effect would be top forever banish it from our national politics.

A GOOD SIDE EFFECT.

AND THEN THERE'S THIS ULTIMATE SOLUTION - ONE I'VE BLOGGED ON THREE OR FOUR TIMES:

INSTEAD OF ABORTING/KILLING the embryo or fetus, why don't we find a way to EXTRACT the unwanted embryo and freeze it for re-implantation!?

after all, the mother who wants an abortion doesn't really REALLY want to KILL the baby; they want to end the pregnancy BEFORE IT GOES TO TERM.

why not find ANOTHER WAY TO END HER PREGNANCY WITHOUT KILLING THE BABY?!?!

tens of THOUSANDS of couple cannot conceive their own babies; they would be able to adopt these fetuses/embryos.

a similar program exists with IN embryos already: SNOWFLAKES, i think it is called.

BOTH sides of the abortion divide should join together to poll resources to discover how this could be made a reality.

babies are not killed; unwanted pregnancies are ended; couples seeking babies get them