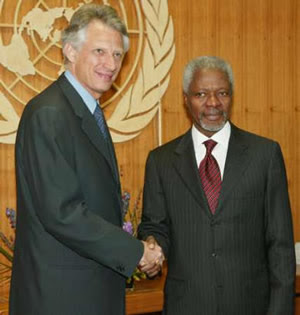 Dominique de Villepin, was indicted Friday morning for his role in the Clearstream scandal.

NO PASARAN ALSO FOUND SOME TYPICAL MSM/NYTIMES DISTORTION IN THEIR COVERAGE OF THE STORY:

Incidentally, notice a difference in the AP report as quoted by the New York Times and its sister paper, the International Herald Tribune. In the former, a sentence reads:

The longtime diplomat, who served as foreign and interior minister under Chirac before being named premier, made his mark on the international stage with a 2003 speech before the U.N. Security Council arguing against the U.S.-led war in Iraq.

In the latter (which features a nonexistent "page" 2), the equivalent part of the article is even more laudatory:

Villepin served as foreign and interior minister under Chirac before being named premier. His international moment of glory came in a 2003 speech before the U.N. Security Council, where he made an eloquent case against the U.S. war in Iraq.

"International moment of glory", "an eloquent case", etc; notice, though, how the half-dozen words of which the latter phrase forms a part are thoroughly misleading — "the U.S. war", U.S. war "in Iraq" ("in Iraq"? shouldn't it be "against Iraq" or, better yet, "against Saddam"? how about "the U.S. invasion of" or "the U.S. intervention in" Iraq, not to mention its "invasion of Saddam's Baasist Iraq" or "intervention against Saddam Hussein"?), we could go on, but you get the idea.


None of those options, although more precise (certainly from a military — i.e., purely strategic and tactical — point of view), would fit the reporter's (or editorial bureau's) lionizing as well.

RELIAPUNDIT: HERE'S HOW THINGS STAND NOW FOR THESE WEASELS:
SCUM. ALL THREE ARE CORRUPT, LYING DHIMMI SCUM.
Posted by Reliapundit at 7:54 PM

Shroeder has finally found a job that suits him. Russian gas station attendant.