HMMM: IN THE FINAL WEEK OF CHRISTMAS SHOPPING, THE STATE-RUN MEDIA IS SPINNING THE ECONOMIC NEWS AND TELLING US THE ECONOMY IS DOING JUST GREAT

BUT THEY SPIN EVERYTHING AS IF THE ECONOMY WAS HUNKY-DORY:


Revision Shows U.S. Growing at Fastest Rate Since 2011
The Commerce Department on Friday revised up its estimate of 3.6 percent to 4.1 percent, saying business spending was stronger than it originally thought.

WHERE AND WHY AND HOW HAS THE INCREASE TAKE PLACE?

ZERO HEDGE GETS TO THE BOTTOM OF THE MATTER:


Earlier today, the Bureau of Economic Analysis surprised everyone by announcing a final Q3 GDP growth of 4.1% compared to 3.6% in the first revision (and 2.8% originally), driven almost entirely by the bounce in Personal Consumption which rose 2.0% compared to estimates of 1.4%.

As a result many are wondering just where this "revised" consumption came from. The answer is below: of the $15 billion revised increase in annualized spending, 60% was for healthcare, and another 27% was due to purchases of gasoline. The third largest upward revision: recreation services. On the flip side, the biggest revision detractors: transportation services and housing and utilities. 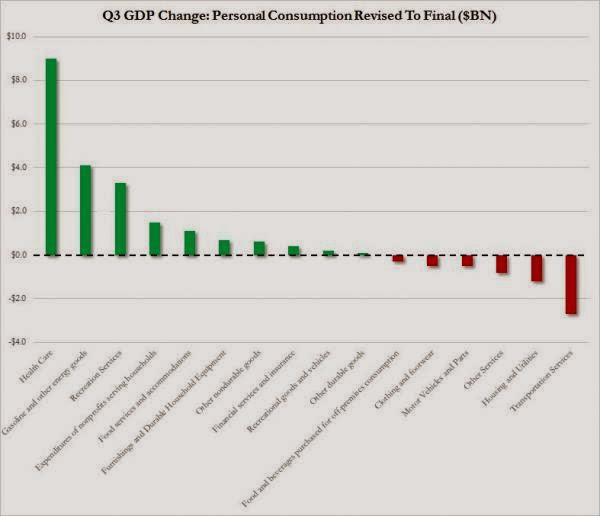 In other words, the BEA thought long and hard what it could revise and decided on the following: in Q3 the US economy was revised to the strongest since 2011 because Americans, it would appear, were gassing up more to visit (and pay) their doctor, and then going to the movies.


IT'S A DESPERATE ATTEMPT TO CREATE AN ATMOSPHERE IN WHICH PEOPLE WILL FEEL LIKE SPENDING MORE MONEY.

I DON'T THINK IT WILL WORK.

BURIED IN THE ABOVE/LINKED-TO ARTICLE:


Economists expect growth to slow in the fourth quarter, in part because some of the upswing has resulted from businesses building up their inventories.

SOME?!?! BS. NEARLY ALL: BBC: But the upward revision was mainly driven by a big jump in businesses restocking their inventories, the Commerce Department said...

PEOPLE KNOW THEIR OWN ECONOMIC SITUATION IS REAL NO MATTER WHAT THEY ARE BEING TOLD ABOUT THE GENERAL ECONOMY.

LIKE THE FACT THAT THE NYTIMES AND THE REST OF THE STATE-RUN MEDIA STILL HASN'T RUN AN AP NEWS-ITEM FROM YESTERDAY ABOUT THE SURGE IN UNEMPLOYMENT.

WHEN THE RETAIL NUMBERS ARE REPORTED IN JANUARY, WE WILL FIND OUT IF 2014 WILL BRING US ANOTHER CONTRACTION OR NOT.

I THINK WE WILL HAVE ANOTHER RECESSION AND THAT OBAMACARE WILL MAKE IT WORSE.

Posted by Reliapundit at 9:37 AM