DON'T BELIEVE THE SPIN-MEISTERS: THE ECONOMY IS NOT DOING WELL

THE BBC SPITS OUT THE STATE-RUN MEDIA'S SPIN IN THE HEADLINE: US economy grows faster than thought

The US economy grew at an annual pace of 3.6% in the third quarter of the year, up from an initial estimate of 2.8%, revised figures have shown.
The growth rate was the fastest since the first quarter of 2012.

EVERYTHING IS GETTING BETTER, RIGHT?

THEY BURY THE REAL TRUTH WAY DOWN IN THE ARTICLE:

But the upward revision was mainly driven by a big jump in businesses restocking their inventories, the Commerce Department said....
The pace of growth in consumer spending - which accounts for about two-thirds of US economic activity - slowed from the previous quarter.
Consumer spending grew at a revised annual pace of 1.4%, down from 1.8% in the April-to-June period and the slowest rate since late 2009. 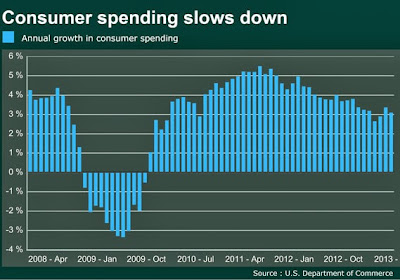 THE GLOBAL  ECONOMY IS HEADED FOR A MAJOR CORRECTION NEXT YEAR - IT'S ALL BAKED IN THE CAKE:
WELL, THAT WILL TRIGGER A CORRECTION AND A STAMPEDE FOR THE EXITS.

HOT AIR: In October, the level of new claims went below the 300K barrier, at least momentarily.  Today, however, it’s back up to 379,000, about where it was eight months ago:


WE ARE HEADED FOR A RECKONING AND IT AIN'T GONNA BE PRETTY.
Posted by Reliapundit at 10:55 PM

I am SO tired of this recession.