A group of Jews that ascended the Temple Mount Sunday were shocked to see that ancient beams of wood that had apparently been used during the period of the Holy Temple were being used as firewood by Arabs on the Mount, and off it.

Archaeologists have dated the wood as far back as the First Temple period, and appear to be among the celebrated “Cedars of Lebanon” mentioned in the Tanach.

The wood, consisting of giant beams, first appeared at the end of the 1930s, when the Al-Aqsa mosque which currently occupies the Temple Mount was refurbished. The beams had been used in the roof structure of the mosque, and already at that time they were said to be thousands of years old by archaeologists – preserved only because they had been used in the building.

Some of the beams were dated to the first Temple period, others to Roman times, and at least one beam was found to have Byzantine-era designs etched on it.

After the beams were removed from the mosque, they were stored in a museum on the Mount. However, in recent years the beams were moved to a corner of the Mount, open to the elements – and archaeologists fear that exposure to winter rain and summer sun will be their undoing.

Some of the beams were taken out several years ago, and more have been spotted in recent months. Reports said that the Arabs, who have been trying for years to get rid of the beams, have begun burning them. 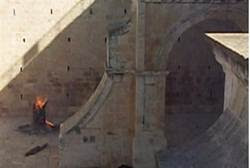 Now, many of the beams have been placed at what appears to be a dumping ground next to the Golden Gate of the Old City, apparently for the use of local Arabs as firewood.

IF THIS IS TRUE, THEN IT PROVIDES A GOOD BASIS FOR TIT-FOR-TAT - AFTER ALL, TURNABOUT IS FAIR PLAY.

IOW: BASED ON THIS REPORT. MECCA WOULD BE FAIRLY TARGETED FOR SIMILAR TREATMENT.