A FRENCH DEMONSTRATION AGAINST ISLAMOFASCISM IN PARIS 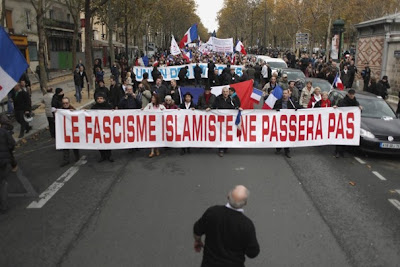 From the Washington Post/AP, news of a positive development:


PARIS — Hundreds of French nationalists have demonstrated in Paris against Islamist extremism, chanting the French anthem and saying the religion has no place in the country.

Protester Romain Cyiril says, “France was always a welcoming country, but for the first time we have to deal with a religion which can’t and doesn’t want to integrate itself.”

Three weeks ago, dozens of far-right French activists stormed an unfinished mosque to protest immigration policies that have made France home to Western Europe’s largest population of Muslims. There are an estimated 5 million or more Muslims in this nation of 65 million, although under French law the government does not track religion.

Saturday’s protest was organized by a nationalist group called the Republican Resistance.

If the government isn't going to respect the public's right to protest totalitarian religions, they should be ashamed of themselves. This is very good that now there's a movement standing up to this monstrosity of a "religion" and making themselves heard and seen. For this, they should be congratulated.
Posted by Avi Green at 2:40 PM