Excerpt from the January 8, 2009, edition of the Guardian, with thanks to Steve, who emailed me the link:

The incoming Obama administration is prepared to abandon President Bush's doctrine of isolating Hamas by establishing a channel to the Islamist organisation, sources close to the transition team say.

The move to open contacts with Hamas - which could be initiated through the US intelligence services - would represent a definitive break with the Bush presidency's ostracising of the group.

There is no talk of Obama approving direct diplomatic negotiations with Hamas early on in his administration, but he is being urged by advisers to initiate low-level or clandestine approaches, and there is growing recognition in Washington that the policy of ostracising Hamas is counter-productive.

There are a number of options that would avoid a politically toxic scenario for Obama of seeming to give legitimacy to Hamas....

Isn't the Hamas Charter clear about its mission?

Israel will rise and will remain erect until Islam eliminates it as it had eliminated its predecessors.

[Peace] initiatives, the so-called peaceful solutions, and the international conferences to resolve the Palestinian problem, are all contrary to the beliefs of the Islamic Resistance Movement. For renouncing any part of Palestine means renouncing part of the religion....

Read the entire Charter of Hamas HERE. Any room for negotiation there?

Joe Biden's prediction of a testing of the incoming administration is coming to fruition, albeit on an accelerated schedule. The honeymoon is over even before it's even begun (with thanks to Brooke, who provided me the link for the following graphic): 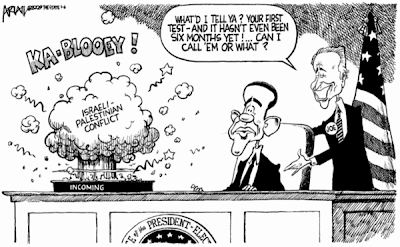 (Crossposted from Always On Watch)

This is something which Robert Malley - a key Obama advisor - has long advocated, and which the Obama Team poo-poohed during the campaign.

Jews who believed Obama were DUPED.

Malley is the son of a Syrian born in Cairo - Simon Malley - who was a close friend and advocate of both Nasser and Arafat.

The apple doesn't fall far from the tree.

WHAT TREE DID OBAMA FALL FROM?

According to MATTHEW, Jesus knew something about fruits and trees:

15Beware of false prophets, which come to you in sheep's clothing, but inwardly they are ravening wolves.

16Ye shall know them by their fruits. Do men gather grapes of thorns, or figs of thistles?

18A good tree cannot bring forth evil fruit, neither can a corrupt tree bring forth good fruit.

19Every tree that bringeth not forth good fruit is hewn down, and cast into the fire.

20Wherefore by their fruits ye shall know them."

WE SHALL SOON FIND OUT...

I'm actually looking forward to O'Boy's "dialogs" with the various scum & villainy of this planet. Watch as the following occurs:

1) He'll declare "new agreements" have been reached.
2) The media will copiously squirt themselves in rapturous praise. (He may get the Nobel Prize!)
3) Any agreements will promptly be violated.
4) The MSM will either ignore the violations, make excuses for them, or blame them on the US.
5) Absolutely no lessons will have been learned. O'Boy will simply repeat as necessary.

If BHO goes about trying to appease Hamas--and I believe that he will -- he'll turn out to be worse than Neville Chamberlain!

All the voters who cast their ballots were duped. They're in for a rude awakening.