Instead of "CHANGE YOU CAN BELIEVE IN" the Obama campaign slogan ought to be "SHIFTS HAPPEN", cuz he has shifted positions so often lefties are getting whiplash!

SO: Here's an idea for a new poster: 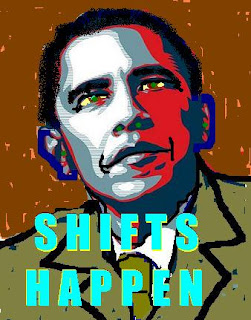 And he or his campaign issues a "clarification" every other day, it seems.

So much so, I'm beginning to think he should change his middle name from Hussein to "Clarification".

I swear to God, that new McCain campaign manager ought to hire you.