HILLARY GAVE OUT CHOCOLATES - BUT WHERE DID SHE GET 'EM FROM? 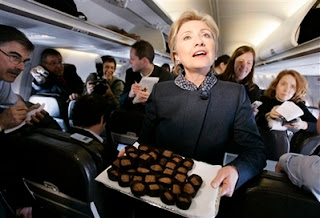 Two shop-owners were today fined for selling chocolate cake - which had been sprinkled with human faeces.

SHE GAVE THEM OUT TO THE TRAVELING PRESS.

HEY: PAYBACK IS A BITCH.

*******UPDATE: Maybe Hillary has more in common with this woman:

A shopping mall in Olathe, Kansas, was evacuated after a woman robbed a bank with a box of chocolates.

The woman walked up to a cashier at the Capitol Federal Bank and said the box contained an explosive and demanded money.

She got away with an undisclosed sum, but after X-raying the package, the bomb squad discovered it contained chocolates and harmless wires.

HILLARY PROMISES THE VOTERS CHOCOLATES - BUT THEN WOULD ROB US TO PAY FOR THEM..
Posted by Reliapundit at 10:01 PM