What the Obama-Iran axis reveals

Prophecies of the endtimes predicted that the false prophet would come with the message of peace and light, but that he is a servant of Satan the liar, the destroyer of mankind. He would be a great orator who keeps the masses spellbound with his words.

In more recent news, Nobel Peace Prize winner Obama has announced a deal with Iran that he argues will help bring peace to the world.

Here is a photo of Obama's and Kerry's Iranian negotiating partner: 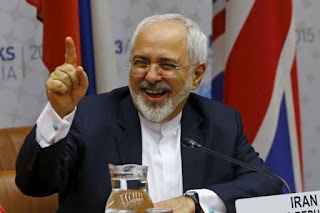 Why is this man smiling?  Because he just signed a deal with the man who traded five of the worst islamoterrorists in Gitmo for one deserter.