PREDICTION: ON THE WAY BACK FROM HAWAII, AIR FORCE ONE WILL "REFUEL" IN DENVER 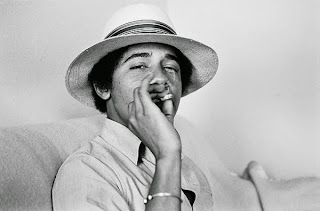 
In his 1995 memoir “Dreams from My Father,” Obama writes about smoking pot almost like Dr. Seuss wrote about eating green eggs and ham. As a high school kid, Obama wrote, he would smoke “in a white classmate’s sparkling new van,” he would smoke “in the dorm room of some brother” and he would smoke “on the beach with a couple of Hawaiian kids.”He would smoke it here and there. He would smoke it anywhere.Now a soon-to-be published biography by David Maraniss entitled “Barack Obama: The Story” gives more detail on Obama’s pot-smoking days, complete with testimonials from young Barry Obama’s high school buddies, a group that went by the name “the Choom Gang.” Choom was slang for smoking marijuana.Maraniss portrays the teenage Obama as not just a pot smoker, but a pot-smoking innovator.“As a member of the Choom Gang,” Maraniss writes, “Barry Obama was known for starting a few pot-smoking trends.”The first Obama-inspired trend: “Total Absorption” or “TA”.“TA was the opposite of Bill Clinton’s claim that as a Rhodes scholar at Oxford he smoked dope but never inhaled,” explains Maraniss. Here’s how it worked: If you exhaled prematurely when you were with the Choom Gang, “you were assessed a penalty and your turn was skipped the next time the joint came around.”As one of Obama’s old high school buddies tells Maraniss: “Wasting good bud smoke was not tolerated.”Another Obama innovation: “Roof Hits.”“When they were chooming in a car all the windows had to be rolled up so no smoke blew out and went to waste; when the pot was gone, they tilted their heads back and sucked in the last bit of smoke from the ceiling.”Maraniss also says Obama was known for his “Interceptions”: “When a joint was making the rounds, he often elbowed his way in, out of turn, shouted ‘Intercepted!,’ and took an extra hit.”

AND THAT MIGHT BE BECAUSE HE WAS/IS A POTHEAD.