SNOWDEN IS A SPY AND NOT A WHISTLE-BLOWER

I hope you're not falling for the Snowden/Greenwald/Putin BS.

Snowden has been attempting to establish "whistle-blower" status ONLY as a clever way to cover-up for his traitorous spying on behalf of our enemies.

WHY? Someone tell me why.

And then Snowden went to China and and then Russia - in an attempt to get to Cuba. These are not libertarian states, and they all are antagonistic toward the USA and our allies. All benefited from the leaks, too. They may have benefited even more from leaks we know nothing about - yet.

And don't forget, that Snowden was red-flagged as a security risk by the CIA in 2009 - way before he had access to NSA overreach.

Therefore, let's not treat him as a libertarian hero.

Remember Daniel Ellsberg? Ellsberg did not go to THE NATION; Ellsberg went to The NYTimes. And never fled, certainly not to the USSR.

Snowden went to Glenn Greenwald and The Guardian - both very left-wing and both long-time antagonists to USA national security and to our military.

If Snowden was a true whistle-blower, then Snowden could have gone to Senators Wyden, Paul or Cruz, and been protected by laws written specifically to protect whistle-blowers.

REPEAT: let's not treat Snowden as a whistle-blower - and certainly not a libertarian hero.

Snowden deserves indictment as a traitor and execution, not amnesty. 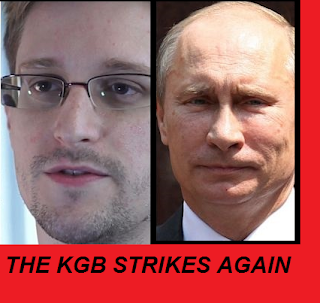 Posted by Reliapundit at 8:45 PM