OBAMA CAUGHT IN ANOTHER BIG LIE ABOUT OBAMACARE 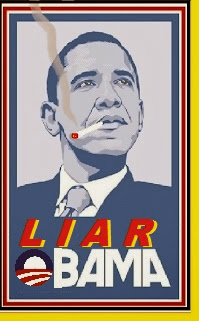 “All the parade of horribles, the worst predictions about health care reform in Massachusetts never came true,” Obama said. “They’re the same arguments that you’re hearing now…Care didn’t become unaffordable; costs tracked what was happening in other places that wasn’t covering everybody.”

Yet a new report from the Massachusetts Health Policy Commission reached a different conclusion.


Massachusetts, whose healthcare reform program was used as a template for the Patient Protection and Affordable Care Act, had the highest per capita health spending in the U.S. in 2009. According to the commission’s report, the state spent $9,278 per person on healthcare in 2009, which was 36% higher than the national average of $6,815, and 11.2% more than the next-highest state, New York, which spent $8,341.

IF OBAMA DIDN'T LIE, THEN HE'D HAVE NOTHING TO SAY.

IF OBAMA COULDN'T LIE, THEN HE WOULD NOT HAVE BEEN ELECTED OR RE-ELECTED.

LYING IN A CONVINCING WAY IS OBAMA'S SINGLE GREATEST ATTRIBUTE.

OBAMA IS A CONMAN, NOT A STATESMAN.
OBAMA IS UNFIT FOR THE OFFICE HE STOLE.

THERE'S ONE WAY TO STOP HIM:

Obamacare is a disaster from beginning to end.  A point I make with my new parody video:

A Day In the Life (under ObamaCare)