A special anti-graft court set up in the West Bank city of Ramallah has convicted a former aide to Yasser Arafat, in absentia, of embezzling millions of dollars during Arafat's rule. Mohammed Rashid and two other businessmen were sentenced to 15 years behind bars and ordered to return 33.5 million euros in stolen funds, in the biggest case against corruption that has festered during the Palestinian Authority's 20-year history. Prosecutors told the court, which was set up by Palestinian President Mahmoud Abbas two years ago, that Rashid profitted from front companies and fled abroad with the money after Arafat's 2004 death.

THE PALESTINIAN ARAB "CAUSE" IS NOTHING MORE THAN AN EXTORTION RACKET RUN BY THUGS, THIEVES, LIARS, CHEATS, AND MURDEROUS GENOCIDAL MANIACS WHO JUST AS SOON STEAL FROM EACH OTHER AS THEY WOULD KILL AN "INFIDEL" OR MURDER THEIR OWN DAUGHTER TO "RESTORE FAMILY HONOR".

ARAFAT EXTORTED AND STOLE BILLIONS, BUT THEY WORSHIP HIM. THEY HAVE EVEN ERECTED A MONUMENTAL TOMB IN SEEMING VIOLATION OF THE "TEACHINGS" OF MOHAMED - WHO HIMSELF HAS NO MONUMENT OR TOMB. 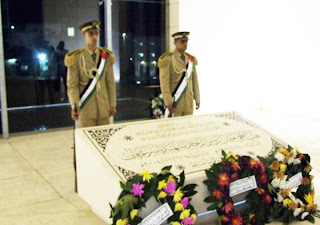 THE WHOLE DAMN LOT OF THEM ARE A FESTERING SORE INFECTING THE ENTIRE REGION.
Posted by Reliapundit at 9:47 AM