LEFTISTS AT IT AGAIN: TRYING TO GET WOONSOCKET RHODE ISLAND TO REMOVE A CROSS FROM A WAR MEMORIAL 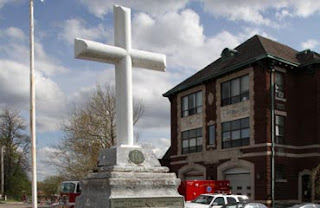 WOONSOCKET – The thorny constitutional principle of separation of church and state is rearing its head over a 1921 World War I monument featuring a prominent Christian cross on city property.

Unlike the recent prayer banner controversy in Cranston, which was sued by the state chapter of the American Civil Liberties Union, the threat of legal action in this case is coming from the Freedom From Religion Foundation, a national nonprofit organization halfway across the country.

On April 13, the Madison, Wisc.-based foundation sent Mayor Leo T. Fontaine a letter calling the display of the “Latin cross” on public property “unlawful” and demanding that the situation be rectified. The monument is located in the parking lot of the Woonsocket Fire Department. But it’s not FFRF’s only problem with the WFD. The foundation says the image of an angel and the inclusion of “The Fire Fighter’s Prayer” on the department’s web site are also unconstitutional.

“It is unlawful for a city and its agencies to display patently religious symbols and messages on city property,” Rebecca S. Markert, a staff attorney for FFRF told the mayor. “Posting a prayer and a picture of an angel on a City website is a direct violation of the First Amendment to the United States Constitution.”

Sprinkled with references to case law affirming the separation of religion and government, the warning has sparked outrage among veterans, city officials and many others in this overwhelmingly Roman Catholic enclave. “We’ve gotten quite a few callers on it, and I have tell you, many of them are angry,” says Larry Poitras, host of a radio talk show on WNRI. Markert said FFRF has over 17,500 members nationwide, including some in Rhode Island, and that she wrote the letter after the foundation was “made aware of these violations by a concerned Woonsocket resident” whom she did not identify.


Gaylor said the group acted in Woonsocket after receiving a complaint from a resident who drives by the monument every day and is offended by it. The person who complained is not one of the group's 45 members in Rhode Island, Gaylor said. She said the foundation receives between 50 and 100 complaints a week.

... Council President John Ward told The Woonsocket Call this week that he agrees with those who say the cross is more of a historical symbol — like the grave markers at Normandy, France — but he said the financially struggling city can't afford to get dragged into a legal battle. "I would not vote to pay to defend it," he told the newspaper.

THE LEFT IS VERY ASSIDUOUS ABOUT ATTACKING CHRISTIANITY, CAREFULLY SELECTING ITS TARGETS. THEY WENT AFTER WOONSOCKET EXPECTING THE "CASH-STRAPPED" CITY TO CAVE IN.

THEY WERE WRONG: ANOTHER CIVIL RIGHTS GROUP WILL DEFEND.

THEIR AIM IS TO MARGINALIZE JUDEO-CHRISTIANITY AND ALL OF ITS INSTITUTIONS AND IN ITS PLACE ERECT A TOTALITARIAN SOCIALIST STATE.

IT'S THEIR GRAMSCIAN AGENDA.

THAT'S WHY THEY DON'T ATTACK LEFTISTS WHEN THEY USE THE CROSS FOR THEIR PROPAGANDA PURPOSES IN FURTHERANCE OF ATTACKING SOME OTHER TRADITIONALIST TARGET, AS CINDY SHEEHAN OFTEN DID WHEN SHE WAS ATTACKING BUSH AND THE GWOT: 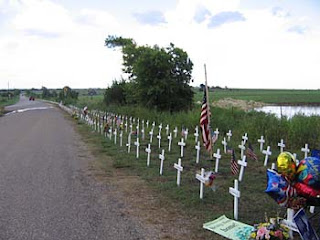 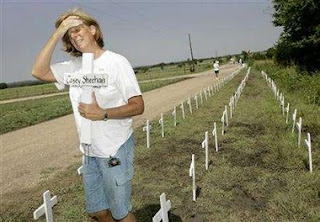 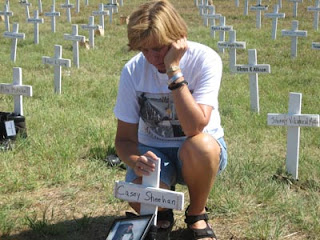 WOONSOCKET OUGHT TO DIVEST ITSELF OF THE PROPERTY UPON WHICH THE MONUMENT STANDS - BY SELLING IT TO A PRIVATE MEMORIAL GROUP, THEN THESE POSTMODERN LEFTISTS POSING AS 1ST AMENDMENT ADVOCATES WILL HAVE TO STFU.


AND THE CREEP WHO SEES IT EVERYDAY AND CRINGES WILL STILL HAVE TO SEE IT; IOW: (S)HE WILL HAVE ACCOMPLISHED ZERO.

THE 1ST AMENDMENT IS AN ANTI-ESTABLISHMENT CLAUSE NOT AN ANTI-RELIGION CLAUSE.

AMERICA WAS NOT FOUNDED BY ATHEISTS ATTEMPTING TO ESCAPE RELIGION; IT WAS FOUNDED BY RELIGIOUS PEOPLE LOOKING FOR RELIGIOUS FREEDOM - NOT "FREEDOM FROM RELIGION".
Posted by Reliapundit at 2:51 PM