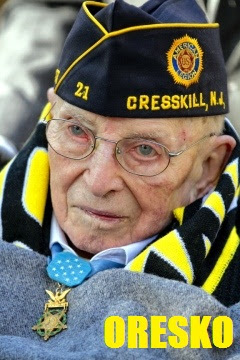 THE OLDEST LIVING RECIPIENT OF THE MEDAL OF HONOR WAS IN NYC FOR THE PARADE.
WIKI:

He was sent to Europe and arrived in France in September 1944, three months after the Normandy landings, as a platoon leader in Company C, 302nd Infantry Regiment, 94th Infantry Division. His unit spent the next several months mopping up pockets of German soldiers who had been bypassed in the Allies' initial push through the northern part of that country. In December, they were redeployed in support of American units which had been forced to withdrawal in the early days of the Battle of the Bulge.[1]

On January 23, 1945, near Tettingen, Germany, Oresko, by then a master sergeant, single-handedly defeated a German bunker, was seriously wounded, and then destroyed a second bunker despite his injuries.

GOD BLESS YOU MR. ORESKO! AND THANK YOU!

Posted by Reliapundit at 8:11 PM