For two decades, the Columbia University professor Manning Marable focused on the task he considered his life’s work: redefining the legacy of Malcolm X. Last fall he completed “Malcolm X: A Life of Reinvention,” a 594-page biography described by the few scholars who have seen it as full of new and startling information and insights.

The book is scheduled to be published on Monday, and Mr. Marable had been looking forward to leading a vigorous public discussion of his ideas. But on Friday Mr. Marable, 60, died in a hospital in New York as a result of medical problems he thought he had overcome. Officials at Viking, which is publishing the book, said he was able to look at it before he died. But as his health wavered, they were scrambling to delay interviews, including an appearance on the “Today” show in which his findings would have finally been aired.

The book challenges both popular and scholarly portrayals of Malcolm X, the black nationalist leader, describing a man often subject to doubts about theology, politics and other matters, quite different from the figure of unswerving moral certitude that became an enduring symbol of African-American pride.

It is particularly critical of the celebrated “Autobiography of Malcolm X,” now a staple of college reading lists, which was written with Alex Haley and which Mr. Marable described as “fictive.” Drawing on diaries, private correspondence and surveillance records to a much greater extent than previous biographies, his book also suggests that the New York City Police Department and the F.B.I. had advance knowledge of Malcolm X’s assassination but allowed it to happen and then deliberately bungled the investigation.

SO JUST WHO IS THIS GUY MARABLE? HERE: NEW ZEAL:

Obama File 62 Obama "Understands What Socialism Is", Works With "Socialists With Backgrounds in the Communist Party"

A leading US Marxist claims that president elect Barack Obama has read some of his books and "understands what socialism is." 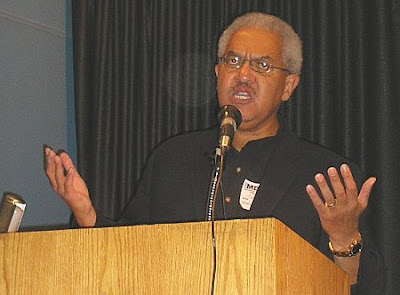 According to Dr Marable;

Obama represents a generation of what might be called post-racial black politicians-by which I mean they espouse a politics that minimises matters of race. They do not like to talk about race and subsume it under the rubric of poverty and class. So they are generally left of centre, or liberal, on social and economic policy. Obama is a progressive liberal.

What makes Obama different is that he has also been a community organiser. He has read left literature, including my works, and he understands what socialism is. A lot of the people working with him are, indeed, socialists with backgrounds in the Communist Party or as independent Marxists. There are a lot of people like that in Chicago who have worked with him for years...

Manning Marable is certainly in a position to know about Obama's views and reading habits. Whether Dr Marable and Barack Obama have ever met I'm usure, but they have been "close" for many years.

Since the 1980s Dr Marable has been a regular speaker at DSA's annual Socialist Scholars Conference, usually at held Cooper Union in New York. In the early 80s, Obama "went to socialist conferences at Cooper Union and African cultural fairs in Brooklyn".

AND THERE'S THIS CONNECTION TOO:

MARABLE WAS A LEADER IN THE NEW PARTY - A SOCIALIST PARTY - AND THE FIRST PARTY OBAMA WAS EVER ASSOCIATED WITH AND ON WHOSE PARTY LINE HE RAN FOR CONGRESS.

MARABLE - ALONG WITH OTHER MALCOLM X ALLIES - LIKE PERCY SUTTON AND JEREMIAH WRIGHT AND BILL AYERS - WERE MAJOR INFLUENCES ON OBAMA, AND HELPED HIM FOR DECADES BEHIND THE SCENES.

THIS LEFTIST-CHICAGO MACHINE AXIS EXPLAINS WHO OBAMA REALLY IS, HOW HE OPERATES AND WHAT HE WANTS TO DO TO THE USA.

OBAMA IS A BREZHNEV SOCIALIST WHO WANTS TO MAKE US MORE LIKE CUBA. [MORE ON THE BREZHNEV COMPARISON HERE.]

AND HOW DID OBAMA - A KID FROM HAWAII AND INDONESIA GOING TO COLLEGE IN LA - GET MIXED UP WITH THE POWERFUL LEFTIST-CHICAGO MACHINE AXIS?

They Blink In Unison said...

“For 12 long years I lived within the narrow-minded confines of the ‘straitjacket world’ created by my strong belief that Elijah Muhammad was a messenger direct from God Himself, and my faith in what I now see to be a pseudo-religious philosophy that he preaches…. I shall never rest until I have undone the harm I did to so many well-meaning, innocent Negroes who through my own evangelistic zeal now believe in him even more fanatically and more blindly than I did.” Malcolm X

It was reported in June 2004 by activist group Racism Watch that Marable had called for immediate action to be taken to end the U.S. military's use of Raphael Patai's book The Arab Mind which Marable described as "a book full of racially charged stereotypes and generalizations." [link]