FILE THIS UNDER TOO LITTLE TOO LATE: BEIRUTIS DEMONSTRATE AGAINST HIZBALLAH AND SYRIA

Tens of thousands of Lebanese on Sunday demanded Hizbullah to be disarmed as they marked the sixth anniversary of a popular uprising against Syrian forces in the country. "It is impossible that any of us here accept tutelage over Lebanon again, whether foreign domination or the domination of arms within Lebanon working for foreign interests," said outgoing prime minister Saad Hariri.

"It is impossible to accept that these weapons ... continue to be turned against the democratic will of the people," added Hariri. "It is impossible to give up the truth, justice and Lebanon," he added. "We won't give up our freedom and we will defend our democracy and constitution."

"You know very well there was nothing impossible to achieve since Rafik Hariri was killed and since the day we met six years ago with the same Lebanese flags," Hariri told the cheering crowd. 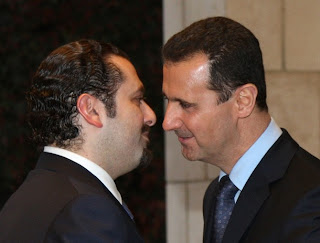 ONLY A FEW MONTHS HARIRI SUCKED ASSAD'S YOU KNOW WHAT AND CRITICIZED ISRAEL.

HE'S ABOUT AS WISE AND BRAVE AS THE UN AND OBAMA - WHICH IS TO SAY A COWARDLY IDIOTIC DUPE AND/OR AN APPEASING PIECE OF CRAP.

THE UNSCR SHOULD HAVE LONG AGO FORCIBLY DISARMED HIZBALLAH, INSTEAD, THEY STOOD BY AND WATCHED AS IT HAPPENED UNDER THEIR NOSES.

THE ONLY WAY TO LIBERATE LEBANON FROM HIZBALLAH AND SYRIA IS TO OVERTHROW THE ISLAMO-FASCIST REGIME IN IRAN.

THE SOONER THE BETTER. PRETTY SOON IRAN'S MULLAHS WILL BE NUCLEAR ARMED.

Hariri's hair must be so greasy from sliding in and out of Hizbollah and Iran's arse so often. They are both so UGLYYY!!

BTW, Bushehr is also close to a number of tectonic-plate meeting points...