Here's an article on Ynet, though only on the Hebrew edition so far, about a couple of Arab Knesset members who paid a visit to the monstrous Libyan dictator just a few months ago. They include, most notably, Ahmed Tibi and Hanin Zoabi, and I'm going to post a few pictures right up front here: 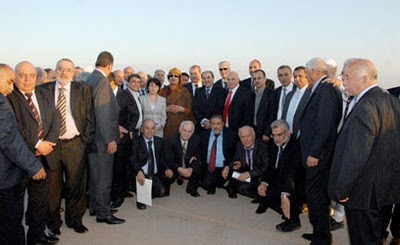 I think the squatting men are members of the Balad party. 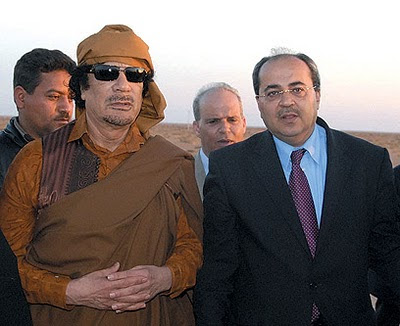 The man next to Gaddafi here is none other than Ahmed Tibi. 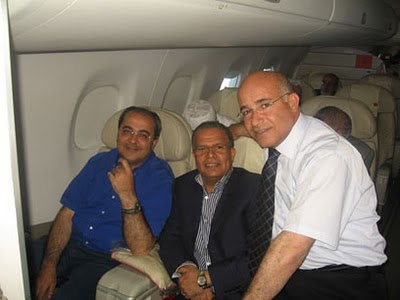 And that's him on a plane too. I'm not sure who the man next to him is though. 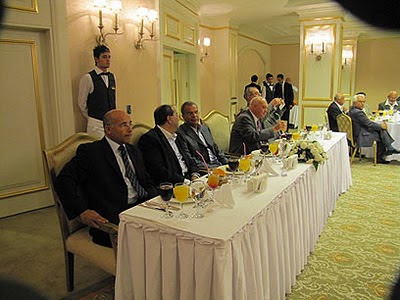 And that's these disgraceful "politicians" sitting at the dinner table in Gaddafi's palace.

Though I couldn't find the exact same article in English, I did manage to find this earlier one from last November, which tells that Tibi got a rebuke for his distasteful actions.

RELIAPUNDIT: HERE IT IS IN ENGLISH.
Posted by Avi Green at 5:04 AM

The bald guy to the right on the airplane is MK Taleb a-Sana - another terror-supporting doucebag. These MKs should be arrested and tried for treason.