LOUGHNER POSED WITH GLOCK IN A G-STRING: I BLAME PALIN!

Law enforcement officials said Friday they have multiple photos of Jared L. Loughner posing with a Glock 9mm pistol next to his naked buttocks and dressed in a bright red g-string.
It is the same model of weapon as the one the police say Mr. Loughner used last Saturday to kill six people, including a federal judge and a 9-year-old girl, and to wound 14 others, including an Arizona congresswoman.

The photos were turned over to the police by Walgreens, where Mr. Loughner had taken the 35-mm film to be developed on Jan. 7, the day before the shooting.

I BLAME PALIN - AND HERE'S WHY - SHE OBVIOUSLY INFLUENCED HIM: 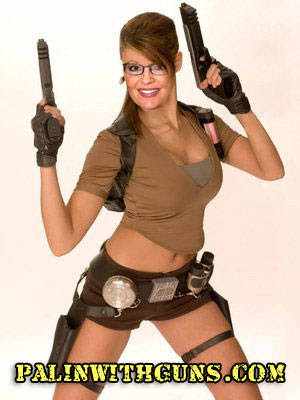 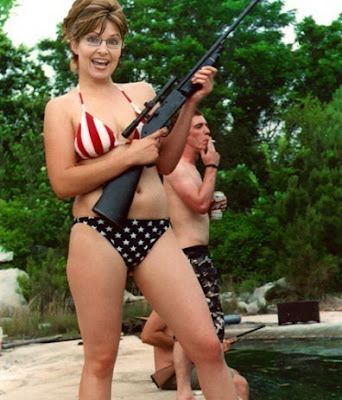 ASIDE: YOU KNOW WHAT'S THE WEIRDEST THING!?

I'LL TELLYA: HE USED 35MM FILM AND NOT A DIGITAL CAMERA! WHAT A PSYCHO!

OR A SOCIOPATH WHO CAREFULLY PLANNED THIS IN ORDER TO MAKE SURE THE PHOTOS WERE FOUND SO HE MIGHT GET OFF WITH LIFE IN A MENTAL HOSPITAL INSTEAD OF THE DEATH PENALTY... AS ONE GIRLFRIEND SUGGESTED...
Posted by Reliapundit at 5:59 PM

I had a minor fender bender the other day after posting a short article on Sarah Palin. It made be late for an appointment and I was in a hurry. Yep, the accident was her fault. Posting a link to this on TOTUS and Obama Cartoons!

i don; think the loughner ones are hoaxes.

they might be deliberate/cogent plants to make him look nuts.

the palin pics are obvious hoaxes.

but not to lefties.

and they were made by lefties.

they typify leftiist hatred of palin - and their hypocritical sexism.

Unfriggin' believable. Though I like the Tomb Raider costume, it's post worthy because after five kids, she would look as close as that image.

I want somebody to grab her video of her address about the Arizona shooting and change the fireplace for a background of where presidents address the nation. Yeah, she looks damn better on a background like that.

the guy from walgreens who got his pics is not being paid enough...