MUSLIM PROPAGANDA EXPOSED: THE CORDOBA ERA OF ISLAM WAS ALSO INTOLERANT AND GENOCIDAL

IMAM RAUF AND OTHERS CONNECTED TO THE CORDOBA INSTITUTE WANT YOU TO BELIEVE THAT ISLAM NOT ONLY HAS A HERITAGE OF TOLERANCE, BUT THAT EUROPE'S FIRST ERA OF TOLERANCE WAS IN CORDOBA, SPAIN - UNDER MUSLIM RULE.

THIS IS A LIE. 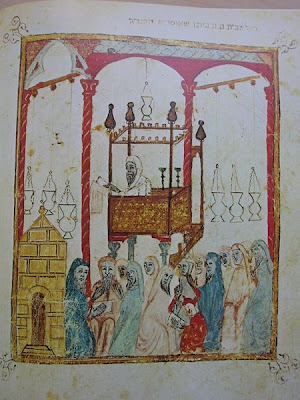 This poem of Abu Ishaq, written in Al-Andalus, Granada in 1066, was considered to be largely instrumental in sparking this massacre. It contains the following lines:

They have violated our covenant with them, so how can you be held guilty against the violators?

How can they have any pact when we are obscure and they are prominent?

Now we are humble, beside them, as if we were wrong and they were right!

On December 30, 1066 (9 Tevet 4827), a Muslim mob stormed the royal palace in Granada, which was at that time in al-Andalus, assassinated Jewish vizier Joseph ibn Naghrela and massacred most of the Jewish population of the city.

The image above shows a Jew reading the torah in Al-Andalus.

USE THE OTHER LINK TO FIND OUT MORE.)

BOTTOM-LINE: MOHAMMEDANISM IS TERRORISM.
Posted by Reliapundit at 11:37 PM