HEY, LET'S MAKE HIM A CITIZEN: 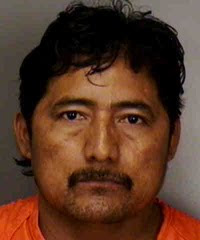 Bail has been denied for a 42-year-old central Florida man accused of stabbing a friend to death and then drinking his blood.

Lopez was picked up Wednesday after he was spotted by a citizen. He is accused of killing Macario Cruz in a house they shared in Bartow.

A third resident, Cruz's sister-in-law Mariella Mendez, told police that Lopez fatally stabbed Cruz because he was having an affair with her. Lopez is the uncle of Mendez and Cruz's wife, who lives in Mexico.

A police report shows the men had an argument in which Lopez struck Cruz in the face with a 15-pound dumb bell. He then allegedly threatened to kill them both unless the relationship ended.

Authorities say Lopez returned later and stabbed Cruz to death. Mendez told police Lopez left with a plastic cup in his hand that appeared to hold blood. She said he drank from the cup in a strange ritual from their native Mexico.

Several reports said all of the adults in the home are illegal immigrants.

IF THIS IS HOW THEY TREAT THEIR COMPATRIOT FRIENDS, THEN...

SERIOUSLY; IF YOU LET ANYBODY WHO WANTS TO WALK ACROSS THE BORDER OR WHO PAYS HUMAN-SMUGGLERS STAY IN THE USA ILLEGALLY, THEN THIS IS BOUND TO HAPPEN.

WE NEED A WALL AND WE NEED IT NOW.

VOTE GOP THIS NOVEMBER IF YOU WANT ILLEGAL IMMIGRATION HALTED.
Posted by Reliapundit at 5:18 PM

The world needs this wall, cause this is what americans do when the go abroad.