OIL RIG ACTIVITY PROVES THERE IS NO OIL SHORTAGE 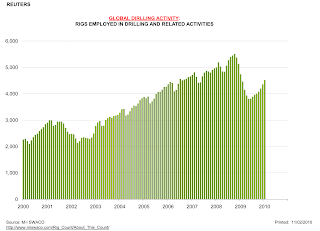 The rebound's strength is evident in rig counts published by M-I SWACO, a joint venture between Smith International and Schlumberger, and the world's leading provider of drilling fluid systems.

M-I SWACO counts rigs directly employed in drilling and related activities. Rigs are included if they are used for drilling, logging, cementing, corning, and well-testing, or are waiting on the weather, as well as running casing and blowout preventer (BOP) testing, but not generally if they are only being used for workovers and completion activities.

The count includes rigs in actual operation, in transit for an immediate start, or that have worked for at least 15 days in the month. Monthly totals are released with minimal delay.

... The rebound is even stronger than the raw figures suggest. Its full strength is masked by the continuing slump in North America, where the largest number of rigs is found. The rig count in the United States (1,399) is still down almost 40 percent from October 2008 (2,238). But in the rest of the world, the number of operating rigs (3,119) is just 5 percent below the pre-crisis level (3,273).

... oil and gas prices have halved compared with July 2008. But the resumption of widespread drilling for both exploration and field development suggests prices and cash flows are high enough to replace production lost from depleting fields and bring on new resources to meet growing demand. With this much activity, current prices should be high enough to meet medium term needs during 2010 and 2011. Unless demand surges, there is no reason to anticipate a return to the very high levels experienced in H1 2008.

THERE IS NO OIL SHORTAGE.

AND, THERE WON'T BE ONE: THE MARKET WILL EXPAND DRILLING/RECOVERY OF OIL IF AND WHEN PRICES GO UP.

THE USA NEEDS TO RAMP UP DRILLING.

HOW CAN WE DO THAT?

EASY: VOTE FOR GOP CONGRESSMAN AND SENATORS.
Posted by Reliapundit at 10:30 AM