BBC: HOW DO YOU JUDGE A MUSLIM ARAB BEAUTY CONTEST? SIMPLE: PICK OUT THE PRETTIEST CAMEL

How do you judge a camel beauty contest?

They're tall, they're blonde, they're elegant, and at the height of their careers they can command millions of dollars. Supermodels? No, camels.

In the remote Western Region of the United Arab Emirates, 28,000 of the humped beasts gathered at the end of January for what was billed as the biggest camel beauty contest ever. 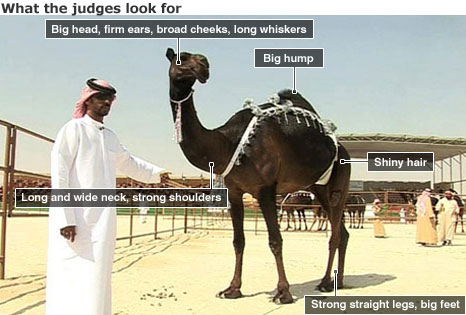 Normally, there's nothing there but sand, but the al-Dhafra Festival filled the arid desert with breeders and their herds, some of which had been driven from as far as Qatar, Saudi Arabia and Bahrain.

The pens bustled with activity. Thousands of people from around The Gulf watched the action from the stands. A handful of judges sifted through the camel pens picking out the top talent.

"The head is the most important thing and this is what we look at first," Mohammed Abdullah al-Mehairi, the head judge, told the BBC.

"We are looking for camels with big heads, firm ears, broad cheeks and big whiskers. There is no single important thing - the neck and body should be long, the hump and the back should be big, and we also look at the colour and posture of the camel."

That photograph looks like it could just have easily been taken in 10,000 BC.

So no other people are competing with animals? Do you know how much money people put on dogs jewelry in the states alone?

AS IN THAT SAYS EVERYHTING.