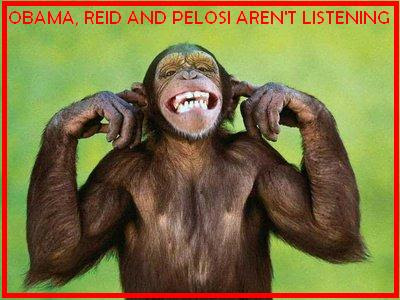 THE DEMOCRATS WOULD RATHER SERVE THE LAWYERS AND GOVERNMENT-WORKERS UNIONS LIKE THE SEIU AND AFSCME THAN THE PEOPLE:

From, of all places, the Associated Press:

WASHINGTON — Most Americans want Congress to deal with malpractice lawsuits driving up the cost of medical care, says an Associated Press poll.

Yet Democrats are reluctant to press forward on an issue that would upset a valuable political constituency — trial lawyers — even if President Barack Obama says he’s open to changes.

The AP poll found that 54 percent of Americans favor making it harder to sue doctors and hospitals for mistakes taking care of patients, while 32 percent are opposed. The rest are undecided or don’t know.

This time, it’s not Rasmussen delivering the bad news among likely voters, but Quinnipiac among registered voters — a sample that should lean more towards Obama than away from him. However, in the latest Q-poll conducted over the full week after Nancy Pelosi slammed her health-care reform bill through Congress, a majority of the 2518 respondents oppose ObamaCare. And while three-quarters of the respondents find Obama personally likable, he’s at a -12 on the issue (via Geoff A):

Three-quarters of American voters – 74 percent – like President Barack Obama as a person, but only 47 percent like most of his policies, and voters disapprove 51 – 35 percent of the health care overhaul passed by the House of Representatives which he has endorsed, according to a Quinnipiac University national poll released today.