NEROBAMA HOSTS CONCERT AFTER CONCERT AS THE NATION BURNS 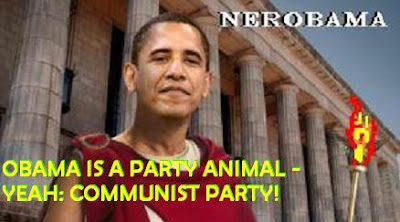 Michelle and Barack Obama sat one table over from J. Lo and Marc Anthony, and all four of them were rocking in their seats as Sheila E. shook the house — well, really the tent.

The latest installment of the White House music series was too big for the East Room, so a high-wattage assortment of Latin musicians sent pulsating, can't-help-but-bob-along rhythms tumbling out of a giant tent on the mansion's South Lawn.

As it happens, music of all sorts — rock, jazz, country, classical — has been busting out of the White House all year long.

The Obamas' musical push started on Day One, when the Wynton Marsalis Quintet played for a private inaugural celebration party of 100 at the White House.

A month later, the White House brought in Earth, Wind and Fire to entertain visiting governors. And days later, the Obamas hosted an East Room tribute to Stevie Wonder that featured Tony Bennett, Martina McBride and Wonder himself. The president called it "the most accomplished Stevie Wonder cover band in history."

Since then, the lineup has zigzagged all over the musical spectrum.

MICHELLE AND BARRY ARE PARTYING THEIR ASSES OFF ON OUR DIME AS THE NATION GOES TO HELL, UNEMPLOYMENT SOARS, THE DEFICITS ZOOM AND MCCHRYSTAL WAITS FOR AN ANSWER.

Posted by Reliapundit at 7:23 PM