WORLD CURRENCY MARKETS HAVE VOTED "NO!" ON OBAMA: DOLLAR SLIDING TO 2008 CRASH LOWS 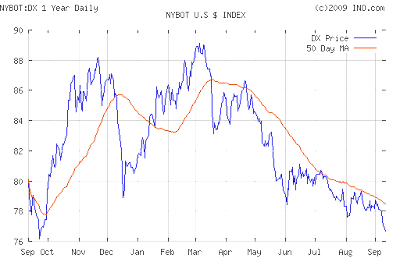 The Dollar Index fell for a sixth day, its longest losing streak since March, after reports showed China’s factory output and lending gained by more than economists estimated, spurring demand for emerging-market assets.

The euro rose to a nine-month high against the dollar on signs ’s recession is abating. The pound climbed to the strongest in a month versus the dollar before a report forecast to show producer prices gained a second month.

The yen strengthened for a second day against the euro amid speculation Japanese exporters are repatriating earnings.

“Solid data in show economic fundamentals are improving, weighing down on the dollar,” said Koji Fukaya, a senior currency strategist in at Deutsche Bank AG. “Risk appetite is coming back.”

THE ECONOMIES OF JAPAN, CHINA, GERMANY AND FRANCE ARE ALREADY GROWING AGAIN.

BUT OBAMA'S USA ISN'T, AND THE WORLD HAS DECIDED THAT OBAMA AND THE USA ARE NOT A GREAT BET RIGHT NOW.

IF OBAMACARE FAILS THEN THE DOLLAR WILL REBOUND.

AND SO WILL THE USA.

IF IT DOESN'T THEN WE'RE HEADED THE WAY OF WEIMAR AND POST WW2 BRITAIN ZIMBABWE AND CUBA.
Posted by Reliapundit at 4:35 PM