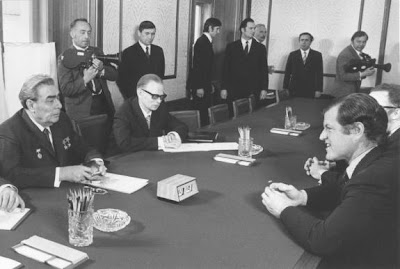 Documents found in Soviet archives after the fall of the Iron Curtain revealed a great deal about the character of Ted Kennedy.

One of the documents, a KGB report to bosses in the Soviet Communist Party Central Committee, revealed that “In 1978, American Sen. Edward Kennedy requested the assistance of the KGB to establish a relationship” between the Soviet apparatus and a firm owned by former Sen. John Tunney (D-Ca.). KGB recommended that they be permitted to do this because Tunney's firm was already connected with a KGB agent in France named David Karr. This document was found by the knowledgeable Russian journalist Yevgenia Albats and published in Moscow's Izvestia in June 1992.

Another KGB report to their bosses revealed that on March 5, 1980, John Tunney met with the KGB in Moscow on behalf of Sen. Kennedy. Tunney expressed Kennedy’s opinion that “nonsense about ‘the Soviet military threat’ and Soviet ambitions for military expansion in the Persian Gulf… was being fueled by [President Jimmy] Carter, [National Security Advisor Zbigniew] Brzezinski, the Pentagon and the military industrial complex.”

Kennedy offered to speak out against President Carter on Afghanistan. Shortly thereafter he made public speeches opposing President Carter on this issue. This document was found in KGB archives by Vasiliy Mitrokhin, a courageous KGB officer, who copied documents from the files and then defected to the West. He wrote about this document in a February 2002 paper on Afghanistan that he released through the Cold War International History Project of the Woodrow Wilson Center.

Tim Sebastian, a reporter for the London Times, found contemporaneous KGB documentation and published a story in February of 1992 of an additional communiqué by Ted Kennedy to the Soviet intelligence agency through Tunney. Full text of the letter from the appendix of Paul Kengor’s book The Crusader: Ronald Reagan and the Fall of Communism can be found here.

This time it was President Reagan in Kennedy’s crosshairs as he attempted to arrange a meeting between Kennedy and General Secretary of the Central Committee of the Communist Party of the Soviet Union Yuri Andropov.

In this May 14, 1983, letter written by underling Viktor Chebrikov to Andropov, he relayed Kennedy’s offer to meet, Chebrikov explaining that Kennedy blamed poor American-Soviet relations not on the Communist country, but on President Reagan. According to Chebrikov’s letter, Kennedy said he wanted to stop Reagan’s re-election effort in 1984.

Chebrikov’s letter also claimed that Kennedy was “very impressed” with Andropov and that Kennedy was reaching out to the Soviets to thwart Reagan’s forceful defense policies. Kennedy suggested the Soviets reach out specifically to Barbara Walters and Walter Cronkite to counter in the American media what he said Kennedy considered Reagan “propaganda.”

Chebrikov's letter to Andropov also stated that Kennedy himself had offered to travel to Moscow to meet with Andropov if he would extend an invitation.

THE BEST THING TEDDY EVER DID WAS CHALLENGE JIMMY CARTER IN THE PRIMARIES IN 1980 AND SOFTEN HIM UP FOR REAGAN.

OTHER THAN THAT HE WAS A BAD FELLOW.
Posted by Reliapundit at 5:49 PM