What Does Allen Stanford Have in Common with Amazon Defense Coalition? Lobbyist Ben Barnes 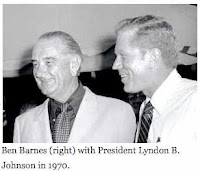 Just when I thought things couldn’t get any shadier, I’ve learned that the lobbyist now representing the Amazon Defense Coalition (via Kohn Swift & Graf, P.C.) in its $27 billion lawsuit against San Ramon, Calif.-based Chevron Corporation is the same man who represented Stanford Financial Group and its now-indicted founder R. Allen Stanford between 2002 and 2008.

Find out what else I learned here.
Posted by Bob McCarty Writes at 8:14 PM