THE SUSAN BOYLE COMEBACK HAS BEGUN! ( A REVIEW ROUND-UP OF HER TRIUMPHANT RETURN TO THE STAGE! WITH VIDEOS) 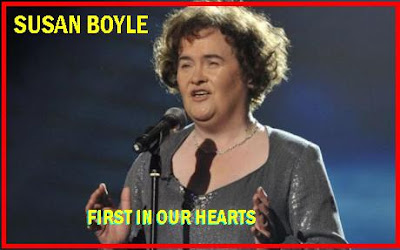 BRITAIN'S Got Talent star Susan Boyle received the homecoming of her dreams last night as she took to the stage of Glasgow's SECC to rapturous applause.

Dressed in a full-length, silver sequined dress, she sang both Memory from the musical Cats and I Dreamed a Dream. She gave an assured performance, receiving standing ovations throughout both songs, and departed the stage blowing kisses to her thousands of fans. Her performance came after a day of doubts over whether she would perform, having already failed to appear at two performances in Manchester on Sunday. But following last night's performance, members of the audience expressed their delight at the show.

Internet superstar Susan Boyle made a triumphant return to the stage Monday in her Scottish homeland.

The crowd gathered to hear the 48-year-old YouTube sensation quite simply went wild as she took to the stage and sang a soaring version of her famous I Dreamed a Dream from Les Miserables.

The plucky Scot put to rest she wasn't up to performing after she missed a gig in Manchester on Sunday.

She dispelled doubts as to whether she would perform in the live tour when she appeared at the opening show in Birmingham on Friday night.

She wowed the crowd with renditions of I Dreamed A Dream from the musical Les Miserables and Memory.

The next day in Sheffield she seemed to stumble over her words as she sang Memory and had provoked a mixed reaction from the audience with several people booing her when her name was announced.

There had been doubts as to whether the now world-famous singer from West Lothian would perform in the Britain's Got Talent live show in Glasgow after pulling out of the event in Manchester.

But the plucky church worker wowed the crowds as she belted out I Dreamed a Dream, the song which made her a global superstar.

Not only did she receive a standing ovation at the end of the performance, the packed concert hall took to their feet as she walked on to stage in a floor-length sparkling dress and twice during her performance, which included Memory from the musical Cats.

SHE MAY NEVER LOSE HER MERCURIALNESS. WHY SHOULD SHE, SHE'S A DIVA!

Sales of tickets for the long-running musical have increased by 46 per cent since Boyle performed the song in the first round of the talent show.

I Dreamed a Dream is a solo sung by character Fantine in Act 1 in the stage production of the Victor Hugo novel. Boyle's version attracted more hits than any other You Tube clip.

Mark Bower, head of lifestyle products for lastminute.com who discovered the rise said: " There has been a clear knock-on effect from Susan Boyle singing 'I dreamed a dream'.

"After her performance ticket sales shot up almost overnight and have maintained a consistent level of popularity."

HERE'S ARE SOME VIDEOS OF HER COMEBACK:

IT'S OFFICIAL: SHE'S BACK! NYTIMES:

It was that kind of weekend for the singer Susan Boyle. Her spokeswoman told The Associated Press that Ms. Boyle, right, was scheduled to rejoin a live tour of “Britain’s Got Talent” performers at a Monday-night concert in Glasgow, after missing earlier stops on the tour over the weekend. ... Her spokeswoman said Ms. Boyle was expected to remain with the tour through its conclusion in July.

LIFE HASN'T KILLED THE DREAM SHE DREAMED!
Posted by Reliapundit at 10:21 PM