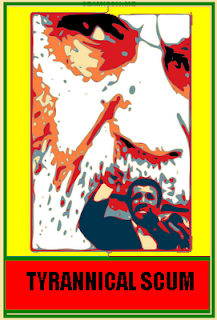 *******UPDATE: BBC: REPORTED MOUSAVI IS APPARENTLY FREE - BUT IN HIDING - AS THE REGIME HAS ROUNDED UP 100'S OF REFORMERS FOR HAVING TIES TO THE RIOTERS...

Outraged supporters of the moderate candidate, Mir Hussein Mousavi, who claimed his defeat in the Iranian election at the hands of hardliner Mahmoud Ahmadinejad was manipulated, took to the streets of Tehran again today raising the prospect of more violent clashes.

With temperatures at 35C , the situation in the Iranian capital threatened to reach boiling point as special forces in riot gear chased protesters through side streets near Fatemi Square. In a sign of the anger among Mousavi's supporters, they chanted "the president is committing a crime and the supreme leader is supporting him", highly inflammatory language in a regime where the supreme leader, Ali Khamenei, is considered irreproachable.

Crowds also gathered outside Mousavi's headquarters but there was no sign of Ahmadinejad's chief political rival, who is rumoured to be under house arrest. Supporters waved their fists and chanted anti-Ahmadinejad slogans.

Iranian presidential candidate Mir Hossein Mousavi was reportedly arrested Saturday following the reformist's defeat at the polls by hardliner Mahmoud Ahmadinejad. Supporters of Mousavi, the main challenger to Ahmadinejad, have responded to the election with the most serious unrest in Tehran in a decade and claim that the result was the work of a dictatorship.

There have been a number of contradictory reports from Iran, in large part due to the heavy restrictions imposed on the media in the Islamic Republic and in particular on foreign reporters.

Mousavi's arrest was reported by an unofficial source, who said that the presidential contender had been arrested en route to the home of Iran's supreme leader, Ayatollah Ali Khamenei. Pro-reform Mousavi has denounced the election as rigged and vowed he will not accept defeat. He and key aides could not be reached by phone Saturday.