We posted several times on the mysterious ADAM AIR crash in 2007:

WAS THE INDONESIAN JETLINER BLOWN UP BY JIHADOTERRORISTS IN A TEST? 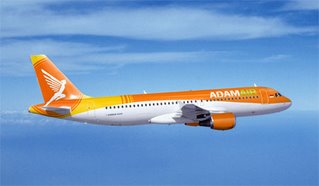 A plane missing over Indonesia with 102 people on board did not send out distress signals or report mechanical problems before disappearing, a top aviation official said today, as search teams intensified their hunt for the Boeing 737.

An hour after Adam Air Flight KI-574 took off on New Year's Day with 102 passengers and crew for what should have been a short hop between islands, the pilot reported heavy winds. Then, the plane disappeared, seemingly into thin air.

"We know nothing, whether it disintegrated in midair, flew into a storm or there were technical problems," said Nicholas Ionides, managing editor for Flight International Magazine in Asia.

A top aviation official said the Adam Air plane that left Java island on Monday for Manado on Sulawesi island did not issue distress signals or complain of mechanical problems. The statements contradicted earlier reports and capped days of confusion.

If this was not a equipment malfunction, or weather related, then it MAYBE it was an act of JIHADOTERROR?

The final report, released on 25 March 2008, concluded that the pilots lost control of the aircraft after they became preoccupied with troubleshooting the inertial reference system and inadvertently disconnected the autopilot.[1]

BUT MAYBE IT WASN'T. MAYBE IT WAS A BOMB: AL QAEDA HAS LONG WANTED TO BLOW UP JETS OVER THE OCEAN, MANY OF THEM ON ONE DAY - USA TODAY:

Two top al-Qaeda operatives smuggled explosive ingredients onto flights from Manila and Hong Kong in 1994 as part of a test run for a failed plot to blow up 12 U.S.-bound airliners, according to a confidential document obtained by The Associated Press.

Captured terror suspect Khalid Sheikh Mohammed's key role in the al-Qaeda plot to simultaneously bomb the commercial planes flying out of Asia — in a 1995 plan called "Project Bojinka" — was one of several admissions that he made, the U.S. Defense Department said.

Defense Department officials released a transcript of Mohammed's confessions, detailing his claims of roles in 31 terror plots worldwide, during a hearing at Guantanamo Bay prison.

Brazilian authorities said military aircraft early today located several more pieces of debris floating in the Atlantic near where an ill-fated Air France flight is believed to have crashed with 228 people aboard.

The debris detected by aircraft radar included a 23-foot section that officials said may be part of Flight 447 that disappeared late Sunday after flying through turbulence and sending out an automatic alert of an electrical failure. ...

.. Matthieu Dumazeau, an Air France pilot who flies a Boeing 747 from Paris to Rio de Janeiro about once a month, also came to pay his respects. He said he has never had a problem flying over the region of the Atlantic where the Flight 447 is believed to have crashed, and was baffled at how such a secure plane could have gone down.

"It is very strange, because there had to be a really long string of events to have caused this, and it went down so fast," Dumazeau said. "That scares me."

There are several reports the last two days about bomb threats received by Air France in brazil the days before this "event":

Air France received a bomb threat for a previous flight from South America to Paris just days before Air France flight 447 crashed into the Atlantic Ocean.

Air France flight 447 disappeared over the Atlantic on Monday en route from Rio de Janeiro to Paris. All 228 people on board are presumed to have been killed.

This report comes from ABC News:

I am very suspicious. I feel that jihadists may have figured out how to smuggle a "disabling device" on to jets in order to bring them down over the ocean.

UPDATE: A WITNESS SAW A FLASH OF LIGHT.

normally they want to get attention when they do somehting likes this. If no one knows that it was a terrorist attack, then what is the purpose?

What was the purpose? Maybe, "practice."

Maybe it is "turbulance activated"

typically, jihadists step all over each other to claim responsibility- Don't you think someone would have made a claim on this disaster by now?

IF THIS IS A PRACTICE RUM FOR BOJINKA 2 THEN THE JIHADISTS WOULD NOT MAKE A CLAIM.

I WONDER IF IT COULD BE A NON-CHEMICAL/NON-EXPLOSIVE DEVICE WHICH SOMEHOW ATTACKS THE ELECTRICAL SYSTEM OF THE JET MAKING IT WILD AND OR UNRESPONSIVE TO THE COCKPIT. MAYBE WITH MICROWAVES OR PERHAPS INSTEAD OF ATTACKING THE COCKPIT THE JIHADOSTS SOMEHOW GET INTO THE UNDERBELLY OF THE JET AND DESTROY THE ELCTRICAL SYSTEM MANUALLY.

Various arguments have been presented as to why Air France 447 was lost at sea. These include structural breakup, computer failure, sabotage, electrical failure, and an electrical fire. What has not been put forth as a possible explanation is unstoppable blinding smoke in the cockpit. I’m not suggesting that smoke in the cockpit is the answer. I’m only advocating that it is a possibility, one not previously offered, and no less plausible an hypothesis than any other. Let’s look at what is known.

Air France received a bomb threat several days before the crash on a different flight at a different airport. The aircraft was inspected but no bomb was found.

At 11 PM local time, the pilot sent a message that the he was flying though strong cumulonimbus thunderstorms. Other reports stated that the vertical speeds were as high as 100 miles per hour. Air France also said that the aircraft’s automatic reporting equipment reported a short circuit.

Ten minutes later, a series of automatic messages indicated that the autopilot had disengaged, stabilizing controls were damaged, and flight systems deteriorated.

At 11:13 p.m. the system that monitors speed, altitude and direction failed. The main flight computer and wing spoilers failed.

According to the DailyMail Online, the Spanish newspaper El Mundo reported that a transatlantic airline pilot reported seeing a flash of white light at the same time the Air France flight disappeared. “ ‘Suddenly we saw in the distance a strong, intense flash of white light that took a downward, vertical trajectory and disappeared in six seconds,’ ”

Sabotage, as with an on board bomb, does not always lead to destruction of the aircraft. In the case of Swissair 330, a bomb exploded on board. The aircraft remained flyable. The pilot attempted to land but could not see due to the smoke in the cockpit. His final sentences were that he could not see to land. His last words were “good-by everybody.” Similar events happened on at least two other aircraft, an Air Cubaña DC-8 and an Air Kuwaiti 737.

On average, there is one unscheduled or emergency landing in North America daily. Most aircraft land without incident. But In July 2007, a NASCAR corporate twin-engine aircraft crashed. It experienced a short circuit. The wire insulation burned and that led to a cry of “smoke in the cockpit.” The aircraft crashed two minutes later. A short circuit lead to the fire and smoke in the crash of Swissair 111. It’s crash, like the crash of ValuJet 592 that preceded it, began with the cry “smoke in the cockpit.” These three examples and many others can be found in a 16-page report listing aircraft in which smoke was a cause or a factor in aircraft incidents and accidents. (See: http://www.smokeinthecockpit.com/references/List-of-Some-Smoke-Related-Accidents.pdf )

Let me reiterate. I am not stating that continuous blinding smoke brought down Air France flight 447. I am saying that continuous unstoppable blinding smoke in the cockpit is an equally worthy hypothesis to consider. For those interested in more information on the subject, you might want to read Air Safety Week’s overview of the unsafe condition of smoke in the cockpit: http://www.smokeinthecockpit.com/references/Air-Safety-Week-Smoke.pdf