WHAT OBAMA'S POLICIES AND THE CHICAGO MACHINE HAVE ALREADY WROUGHT: A MURDEROUS DISASTER IN CHICAGO 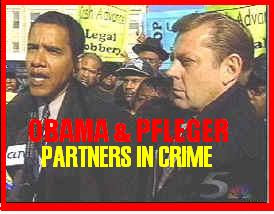 The Rev. Michael Pfleger has ordered the American flag at St. Sabina Church hung upside-down -- a historic sign of distress -- to symbolize the growing death toll among the city's youngsters.

Alex Arellano was beaten, burned and shot in the head last week. He was 15.

So far this school year, 36 children and teens have been murdered -- more than one a week -- and Pfleger is among a chorus of weary Chicagoans who say the slayings aren't getting the attention they deserve.

Had 36 kids died of swine flu this year, "there would be this great influx of resources that say, 'Let's stop this, lets deal with this,' " Pfleger said.

Instead, because violence is driving the epidemic, "We're hiding it. We're ignoring it. We're denying the problems," he said.

Pfleger is not the first Chicagoan to express the sentiment. In 2007, after the city recorded 31 murdered children during the school year, Arne Duncan, then-CEO of public schools, expressed similar disappointment. Video Watch why the violence seems worse now »

Duncan, who now serves as President Obama's secretary of education, said "all hell would break loose" if these killings took place in one of the metro area's upscale enclaves.

"If that happened to one of Chicago's wealthiest suburbs -- and God forbid it ever did -- if it was a child being shot dead every two weeks in Hinsdale or Winnetka or Barrington, do you think the status quo would remain? There's no way it would," he said.

Yet the problem has only worsened since Duncan publicly shared his observation. With about a month left in the school year, Chicago's public schools have topped the number of students slain in the 2007-2008 and 2006-2007 school years -- 27 and 31, respectively. 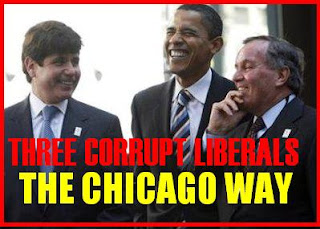 WHAT PUNDITARIAN SAID ABOUT THIS (paraphrasing):

Chicago is a city that has been ruled by the Daley machine for 75 years.

And Obama is a product of that machine and he espouses those policies.

And that machine is nowhere more powerful than in the ghetto.

But don't wait for Pfleger to tell the truth about it.

Or the old time media

Obama and his corrupt thug cronies from the machine - Rahm Emanuel and Valerie Jarrett and Rezko and Blago and Wright and Ayers and Pfleger and Duncan --- the Sec Ed --- et al - are in the process of turning the whole nation into Chicago.

They will succeed if we let them.

We mustn't let them.

(CLICK OBAMA-PFLEGER PIC ABOVE FOR MORE ON THIS CORRUPT LEFTIST TWOSOME. WHAT SCUM.)

Posted by Reliapundit at 6:41 PM