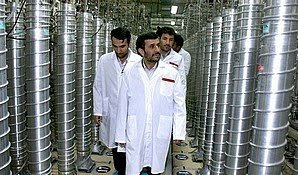 Iran had "crossed the technological threshold" and its attainment of nuclear military capability is now a matter of "incorporating the goal of producing an atomic bomb into its strategy," OC Military Intelligence Maj.-Gen. Amos Yadlin told the cabinet on Sunday.

"Iran is continuing to amass hundreds of kilograms of low-level enriched uranium, and it hopes to exploit the dialogue with the West and Washington to advance toward the production of an atomic bomb," he said.

Posted by Reliapundit at 5:04 PM

I think these are all reasonable predictions.