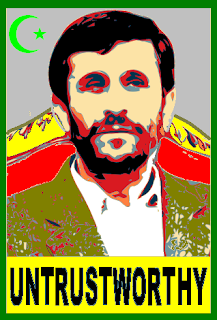 Iran and Syria have until next week to explain to a United Nations sanctions committee how they were involved with a ship detained off Cyprus in January found to be loaded with explosives believed to be bound for Gaza.

The ambassadors of France and Britain described the episode at a Security Council meeting held Tuesday in New York as a "gross violation" of existing resolutions banning Iranian arms exports.

Both countries are required to respond within ten working days, according to a statement from Japanese ambassador Yukio Takasu, who chairs the Security Council committee set up in 2006 to oversee Iran sanctions. The committee determined February 6 that Iran was in violation of existing sanctions but has not taken any punitive action.

Ten days....
and then...
the UN will send a very harshly worded letter.

There is no non-violent way to end the threat presented by Iran. UNLESS YOU WANT TO TRUST THEM.

To delay is to give them time to strengthen.
Posted by Reliapundit at 11:07 PM

I recently came across your blog and have been reading along. I thought I would leave my first comment. I don't know what to say except that I have enjoyed reading. Nice blog. I will keep visiting this blog very often.