BREAKING NEWS: IT'S OFFICIAL: SWEDEN IS A VASSAL STATE OF THE CALIPHATE

THIS IS HOW IT HAPPENS FOLKS: GATEWAY:

Last week Sweden forced the Israeli Davis Cup tennis team to play in an empty stadium due to threats of violence by local radicals. This week Sweden banned the Israeli Taekwondo team from even entering the country! The Swedish authorities said it was because, "Ten thousand members of a Muslim organization are threatening to settle the account with you because of the war in Gaza."

Mere Rhetoric has more on this growing threat in Sweden.

FOR ALL INTENTS AND PURPOSES SWEDEN IS EITHER A VASSAL OF OR ALLIED TO "THE CALIPHATE". 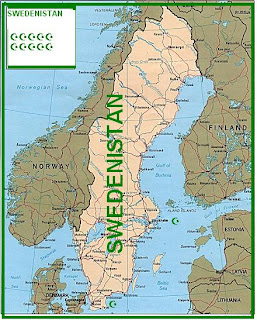 EVIDENTLY, THERE ARE NOW ENOUGH JIHADISTS IN SWEDEN TO MAKE THE SWEDISH GOVERNMENT A DHIMMITUDINOUS BOWL OF JELLO.

UNLESS SOMETHING CHANGES, THE REST OF EUROPE WILL BE THE SAME WITHIN TWENTY YEARS.
Posted by Reliapundit at 8:21 PM

Well put, RP. You boiled it down to it's essence.

The decision to play tennis in an empty stadium was not based on security problems. It was jus more a political decision than anything else

Well, Sweden may not be specifically catering to anti-Israel Muslim, versus its more general anti-Jewish population. Sweden remained "neutral" during WWII. From the Allied POV, Sweden was about as neutral as Spain aka they were both pro-Axis, just not openly belligerent.