GOD AND MAN IN AMERICA: THERE IS NO BASIS FOR THE SEPARATION OF "FAITH" AND "STATE"

THE DECLARATION IS BASED ON NATURAL LAW AND BELIEF IN - FAITH IN - THE CREATOR, GOD.

THE CONSTITUTION FORBIDS THE ESTABLISHMENT OF ANY OFFICIAL STATE SECT, BUT NOT OF RELIGION OR FAITHFULNESS.

IT'S AN "ESTABLISHMENT CLAUSE", NOT AN "ATHEISM CLAUSE".

ALL THE FOUNDERS WERE MEN OF FAITH WHO BELIEVED IN NATURAL LAW.

PRESIDENT WASHINGTON SPOKE OFFICIALLY OF PROVIDENCE AND GOD ALL THE TIME. 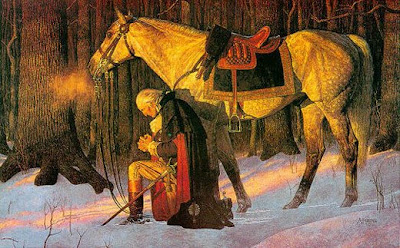 WASHINGTON'S THANKSGIVING PROCLAMATION IS BUT ONE EXAMPLE; (EXCERPT):

Whereas it is the duty of all nations to acknowledge the providence of Almighty God, to obey His will, to be grateful for His benefits, and humbly to implore His protection and favor; and

Whereas both Houses of Congress have, by their joint committee, requested me "to recommend to the people of the United States a day of public thanksgiving and prayer, to be observed by acknowledging with grateful hearts the many and signal favors of Almighty God, especially by affording them an opportunity peaceably to establish a form of government for their safety and happiness:"

THE SEPARATION OF CHURCH AND STATE DOES NOT MEAN THAT THE STATE IS OBLIGATED TO BE ATHEISTIC, JUST SECT-LESS.
Posted by Reliapundit at 5:50 PM