Is This The Beginning of Global Cooling?

Many scary stories have been written about the dangers of catastrophic global warming, allegedly due to increased atmospheric concentrations of the greenhouse gas carbon dioxide (CO2) from the combustion of fossil fuels. But is the world really catastrophically warming? NO. And is the warming primarily caused by humans? NO.

Since just January 2007, the world has cooled so much that ALL the global warming over the past three decades has disappeared! This is confirmed by a plot of actual global average temperatures from the best available source, weather satellite data that shows there has been NO net global warming since the satellites were first launched in 1979. 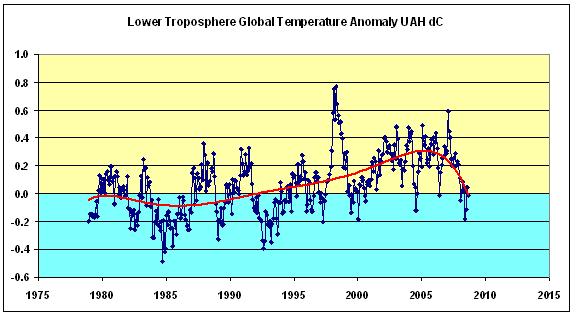 Since there was global cooling from ~1940 to ~1979, this means there has been no net warming since ~1940, in spite of an ~800% increase in human emissions of carbon dioxide. This indicates that the recent warming trend was natural, and CO2 is an insignificant driver of global warming.

Furthermore, the best fit polynomial shows a strong declining trend. Are we seeing the beginning of a natural cooling cycle? YES. Further cooling, with upward and downward variability, is expected because the Pacific Decadal Oscillation (PDO) has returned to its cool phase, as announced by NASA this year.

Global warming and cooling have closely followed the phases of the PDO. The most significant pattern of PDO behavior is a shift between "warm" and "cool" phases that last 20 to 30 years. In 1905, the PDO shifted to its "warm" phase. In 1946, the PDO changed to its "cool" phase. In 1977, the PDO returned to its "warm" phase and produced the current warming. In 2007-8, the PDO turned cold again, so we can expect several decades of naturally-caused global cooling.

Some scientists are predicting that this cooling will be severe, and is a greater threat to humanity than global warming ever was. Meanwhile, politicians are still obsessing about global warming.

Posted by John Ray. For a daily critique of Leftist activities, see DISSECTING LEFTISM. For a daily survey of Australian politics, see AUSTRALIAN POLITICS Also, don't forget your roundup of Obama news and commentary at OBAMA WATCH (2). Email me (John Ray) here
Posted by JR at 9:05 AM