A little bit of fun

Read the following and see what you think 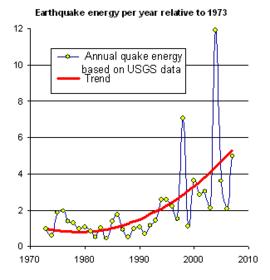 New research compiled by Australian scientist Dr Tom Chalko shows that global seismic activity on Earth is now five times more energetic than it was just 20 years ago. The research proves that destructive ability of earthquakes on Earth increases alarmingly fast and that this trend is set to continue, unless the problem of "global warming" is comprehensively and urgently addressed.

The analysis of more than 386,000 earthquakes between 1973 and 2007 recorded on the US Geological Survey database proved that the global annual energy of earthquakes on Earth began increasing very fast since 1990. Dr Chalko said that global seismic activity was increasing faster than any other global warming indicator on Earth and that this increase is extremely alarming. "The most serious environmental danger we face on Earth may not be climate change, but rapidly and systematically increasing seismic, tectonic and volcanic activity," said Dr Chalko.

"Increase in the annual energy of earthquakes is the strongest symptom yet of planetary overheating. "NASA measurements from space confirm that Earth as a whole absorbs at least 0.85 Megawatt per square kilometer more energy from the Sun than it is able to radiate back to space. This 'thermal imbalance' means that heat generated in the planetary interior cannot escape and that the planetary interior must overheat. Increase in seismic, tectonic and volcanic activities is an unavoidable consequence of the observed thermal imbalance of the planet," said Dr Chalko.

Dr Chalko has urged other scientists to maximize international awareness of the rapid increase in seismic activity, pointing out that this increase is not theoretical but that it is an Observable Fact. "Unless the problem of global warming (the problem of persistent thermal imbalance of Earth) is addressed urgently and comprehensively -- the rapid increase in global seismic, volcanic and tectonic activity is certain. Consequences of inaction can only be catastrophic. There is no time for half-measures."

It sounds sort of plausible, doesn't it? Until you think about it. How can minor changes in the atmosphere affect events deep down beneath the earth? I downloaded the story from a press-release service that Tom Chalko used to circulate it. So did quite a few other people. No need to think much more about it, however. It is pseudo-science -- as even a Leftist blogger pointed out.

The amusing thing, though, is that Associated Press -- the great grand fact-checking news service that newspapers worldwide rely on -- was also taken in and included it in their feed. And even the proudly-fact-checking CBS (remember Dan Rather?) was taken in. They have however now taken it down. If you have forgotten the CBS Dan Rather fun and games, see here. Once again pajamas beat the (largely mythical) media fact-checkers.

For yet another AP booboo see here (fifth picture caption).


Posted by John Ray. For a daily critique of Leftist activities, see DISSECTING LEFTISM. For a daily survey of Australian politics, see AUSTRALIAN POLITICS Also, don't forget your roundup of Obama news and commentary at OBAMA WATCH
Posted by JR at 9:51 AM