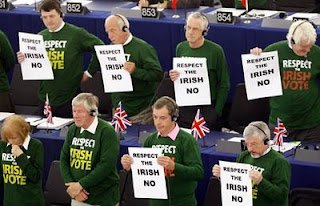 On Wednesday, the House of Lords adopted a bill approving the Treaty of Lisbon. On the eve of a European crisis summit, Prime Minister Gordon Brown hopes to arrive with a British ratification in his pocket, the first since the Irish "no" on June 12.

The upper chamber of the British Parliament adopted the bill at 07:30 p.m. GMT, by a voice vote - without a precise count of votes - after a long afternoon of debates disrupted by four persons from the public (...) who were removed by security guards.

The document approved by the parliamentarians now requires only the Royal Assent, a simple formality. This final step is scheduled for Thursday at 10:00 a.m. GMT.

The Telegraph has an English-language version of the story. Here is an excerpt:

Spreadbetting millionaire Stuart Wheeler, who is awaiting a High Court decision on his application for a judicial review of the Government's refusal to hold a referendum on the Treaty, accused Mr Brown of "stifling democracy". "The people of Ireland have spoken but our Prime Minister has chosen not to listen," said Mr Wheeler." "Instead of taking on board the wishes of the only four million people in the EU allowed to have their say on the Lisbon Treaty, it seems he will ask the Queen to give Royal Assent to this Bill."

"Surely the Prime Minister could delay the ratification of this Treaty. If nothing else he could wait until the High Court has ruled whether his refusal to hand the British people a referendum was unlawful." "The Government has one last chance to do the right thing - say they will not actually ratify the treaty without a referendum."

"Surely the people of Britain deserve this at the very least."

Several pro-referendum protesters were thrown out of the Lords public gallery after voicing their demands for a poll during this afternoon's debate.

if democracy doesn't give the socialists what they want then they won't hesitate to abort the democratic process.

They've tried that before...

THE LEFT IS FUNDAMENTALLY ELITIST AND ANTI-DEMOCRATIC - ALL STATISTS ARE.

THEY MUST BE OPPOLSED EVERYWHERE AND FOR ALL TIME.