Heroin packaged as a book

Seldom does an eagerly anticipated sequel meet the hype. Even less frequently does it exceed the original, especially when the latter received numerous awards and hit all of the bestseller lists. Such an anomaly is Robert Ferrigno's Sins of the Assassins, the second volume in the Assassin Trilogy. 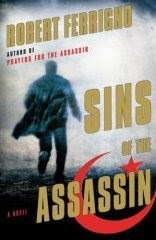 Epic in scope, cinematic in its plotting, startling in its violence and ultimately realistic despite its futuristic setting, Sins features the return of Rakkim Epps in a post-nuclear U.S. In Prayers for the Assassin, Epps uncovered the true backdrop behind a so-called "Zionist" attack on Washington, New York and Mecca. The attacks triggered a second U.S. Civil War that eventually split the country into a moderate Islamic Republic and a Christian-oriented Bible Belt. With help from his long-time friend Sarah, Epps exposed "the Old One" as the instigator of the nuclear attacks. The Old One, bent on establishing a global Islamic empire with North America as its cornerstone, was stopped dead in his tracks by Epps and Sarah but escaped to live another day.

In "Sins", another, darker day has arrived. The United States is more fragmented than ever as the Christian Bible Belt is racked by warring factions; the Islamic Republic has become increasingly radicalized as Sharia law spreads; and the Aztlan Empire (Mexico) and Canada are encroaching on the old southern and northern borders.

Worse, word of a legendary super-weapon buried in a remote mountain area -- a highly-classified DoD project in the old U.S. regime -- threatens to unravel the fragile truce that exists between the Islamic Republic and the Bible Belt. Epps is tagged for a secret mission by the president of the moderate Islamic Republic to retrieve the weapon. Any hope for a "re-United States" hangs in the balance as a variety of international players -- including China, the modern global superpower -- race to control the weapon.

Epps is one of the Islamic Republic's elite "shadow warriors," a tiny cadre of special operatives groomed for commando activity behind enemy lines and genetically enhanced for night vision, fighting skills and agility. Compounding Epps' troubles, however, he's ordered to bring Leo -- an unathletic, unworldly nineteen year-old scientific genius -- with him on his nerve-wracking mission into the Bible Belt. Leo's job will be to quickly interpret the weapon's technology and to perform other classified tasks to which even Epps is not privy.

Along the way, Epps grapples with his own religious beliefs. As the violence escalates, he becomes convinced that somehow, some way, the spirit of Darwin -- the ultimate assassin controlled by the Old One -- has entered his being. Epps struggles to maintain control over his own schizophrenic existence as he and Leo weave their way through the Bible Belt's fragmented terroritories of religious cults, militias and corrupt officials.

As Rakkim and Leo wend their way to the mountain and the weapon within, they face not only the combined forces of the Old One, but a formidable militia led by "the Colonel", a military legend in the Bible Belt. Foremost among the Colonel's troops is Gravenholtz, a mechanically enhanced super-soldier capable of unbelievable savagery.

If Hollywood hasn't optioned the Assassin series, it's high time some Porsche-driving, mousse-laden genius arranged a meeting with Ferrigno's representatives.

The only downside of the book? You'll need the literary equivalent of methadone to overcome withdrawal once the story ends. And you'll be marking the calendar for the final chapter of the triad.
Posted by directorblue at 10:08 AM